We started our monthly Dorkbot meetings in 2009. This month, we renamed the event to the more descriptive Aachen Maker Meetup and set up a Meetup group (https://www.meetup.com/Aachen-Maker-Meetup/), to better reach our community. We were also able to provide pizza and soft drinks through funds for community support from our 3D Competence Center research project. Future events and details will also be posted on the Meetup page. Please sign up for the event there if you'd like to come, to help us plan the event and order the right amount of food—thanks!

This month's meetup was all about learning electronics, soldering, coding, 3D modeling, and other Maker skills. How did you learn what you use today? How will we learn these skills in the future?

We had around 50 participants this evening, and many brought along the tools they had learned maker skills with, with a clear focus on electronics. There were also quite a few other project demos. We started at 6:30 pm, and wrapped up after midnight. We were very happy to see so many people—thanks to everybody, and we hope our future events will be as much fun!

People started to arrive at 6:30pm. After some soft drinks, mingling, and networking, host Prof. Jan Borchers started his talk show-like interviews around 7pm, and the house was packed. 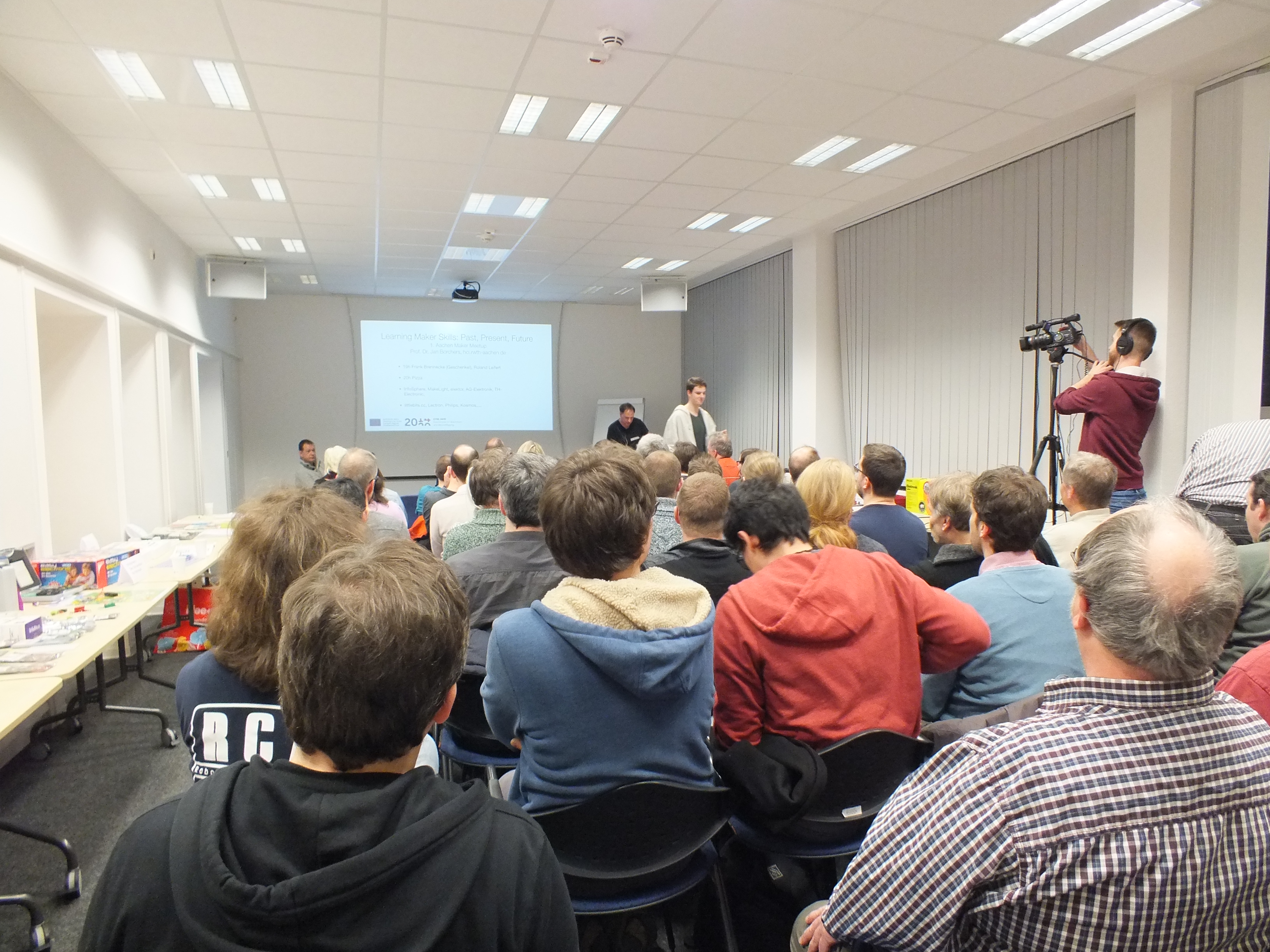 The first interview was with Frank Brennecke, our special guest this evening, who came all the way form Berlin to Aachen for the event. Like many others, he started out in electronics as a kid with Philips experiment kits in the 70's and 80's. After selling his collection, he decided to get back into the topic in 2008, but instead of just relishing the nostalgia, he has since been hacking and expanding these kits to cover modern electronics, from digital TV technology to AVR microcontroller programming and graphical touchscreen user interfaces. His work has been featured in c't Make and at Maker Faire Hannover. Today, under the name JeanLuc7, he is very active on Thomas Rigert's EE Forum that focuses on electronics learning kits of all kinds. 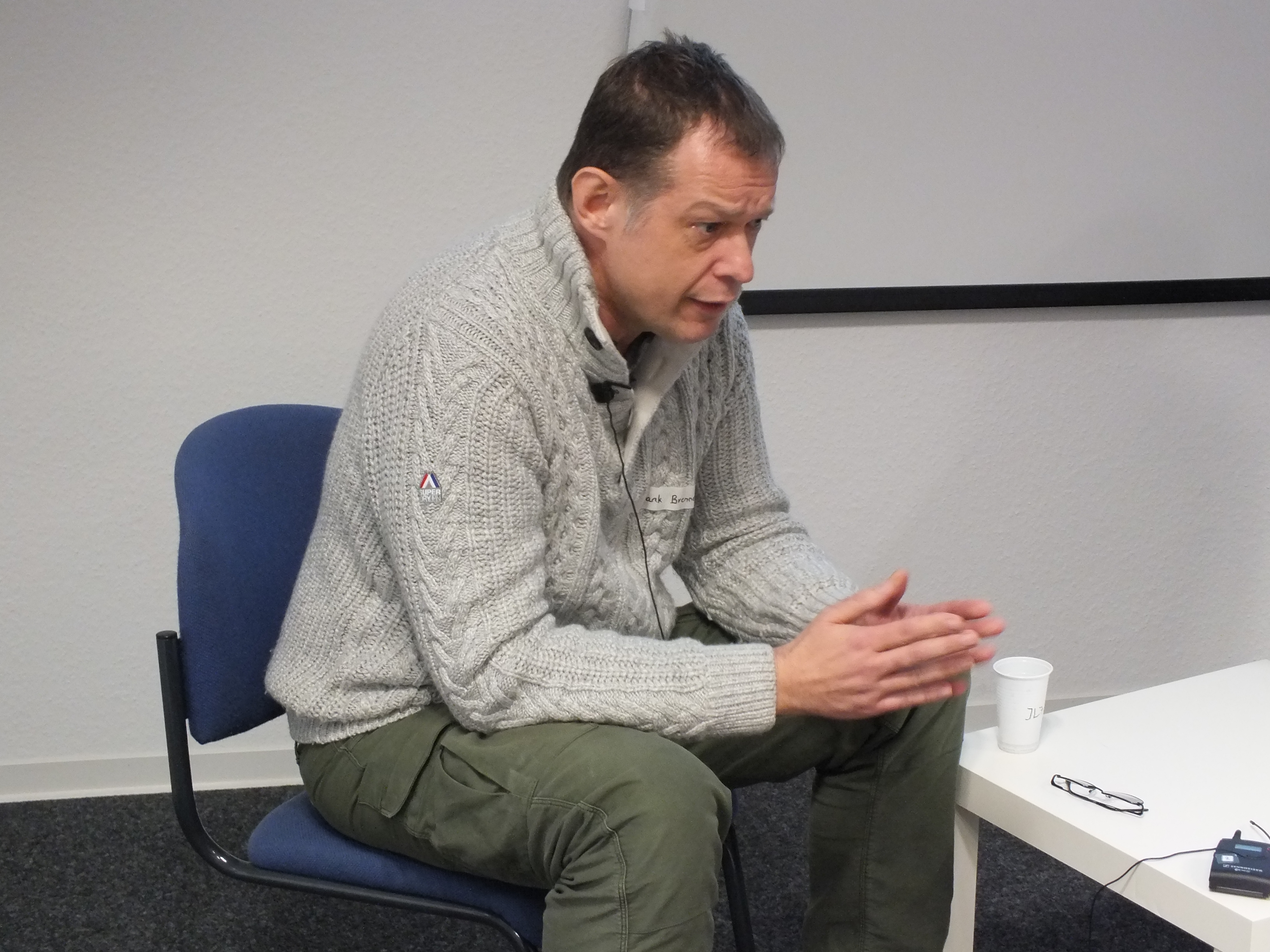 After his interview, it was time for presents: Frank had brought twenty PCBs for his AVR-based touchscreen graphics module developed with others from the EE Forum), which were given away in a little impromptu electronics quiz. 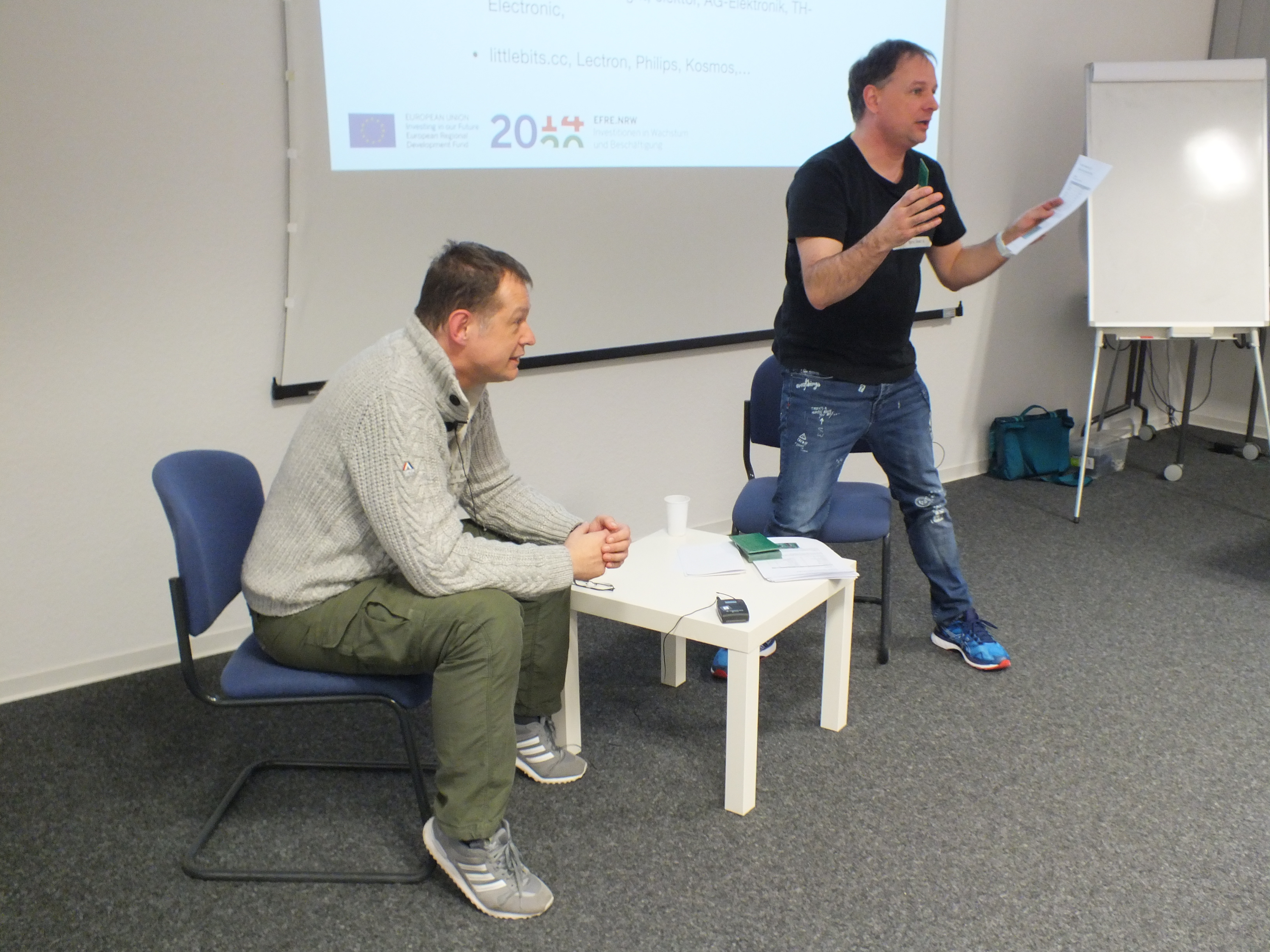 Our second guest was a regular attendee: Roger Leifert (left in the picture below) is the CEO of electronics company AK Modul-Bus Computer GmbH, and runs KainkaLabs together with electronics legend Burkhard Kainka, who was our guest at a previous meetup. They have a great YouTube channel on maker tools and projects. He talked about the Lectron electronics learning system. He received this as a kid from a teacher living next door, it brought him to the topic of electronics, and he considers it a must-have for any electronics maker who quickly wants to test or teach basic circuit designs. Hear his full story in part 29 of his excellent Every Maker Should Have One videos!

The Lectron system was developed in Germany in the 60s, redesigned by Braun star designer Dieter Rams (who Apple's chief designer Johnny Ives cites as being highly influential on the iPod and other Apple designs), and is being developed and available until today. The full history is documented at lectron.info, the German non-profit store at lectron.de. 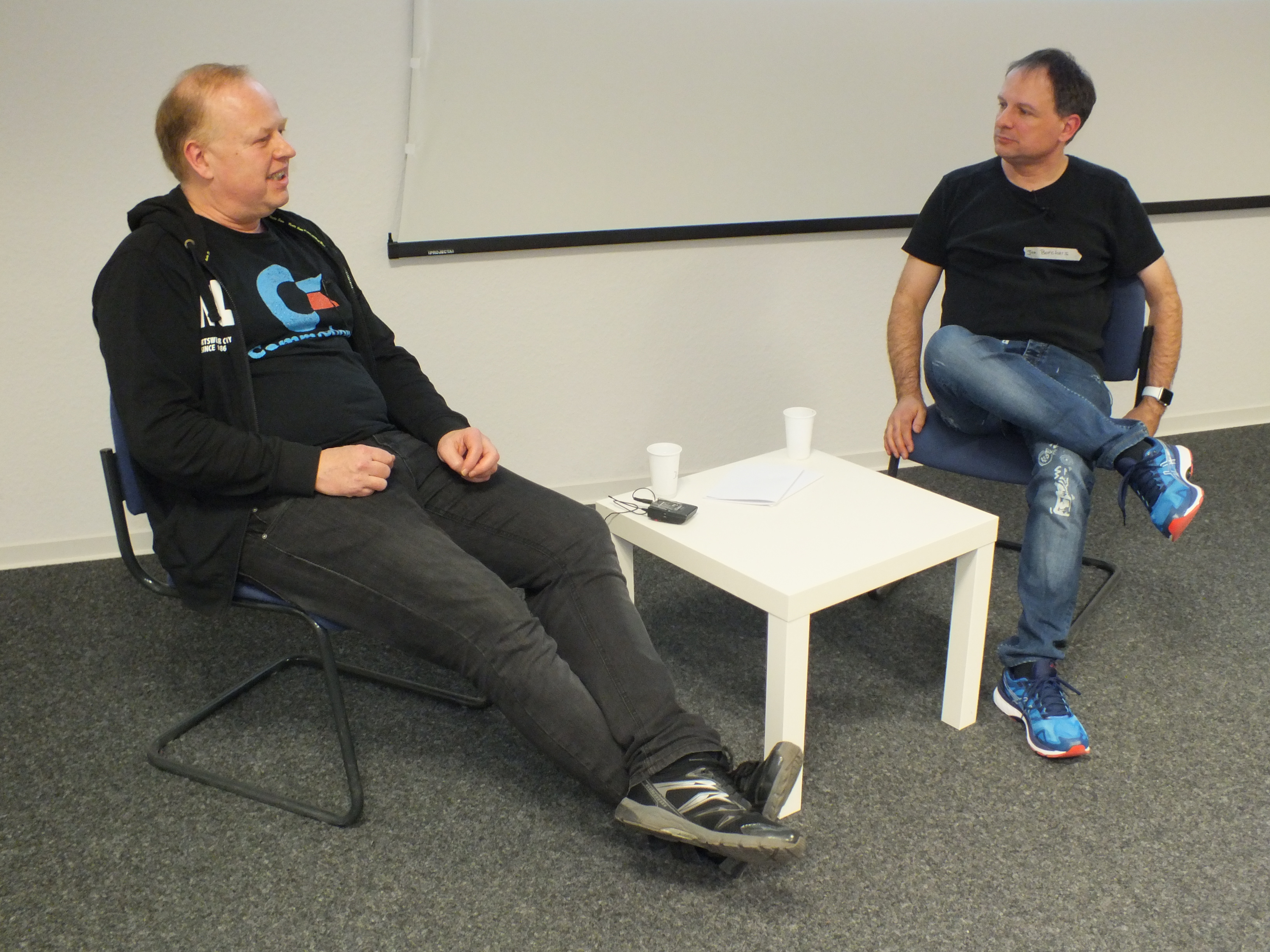 After that second interview, networking and discussions about each other's projects began. As maker-style energy boost, we provided free pizza, possibly the evening's most anticipated arrival. ;) 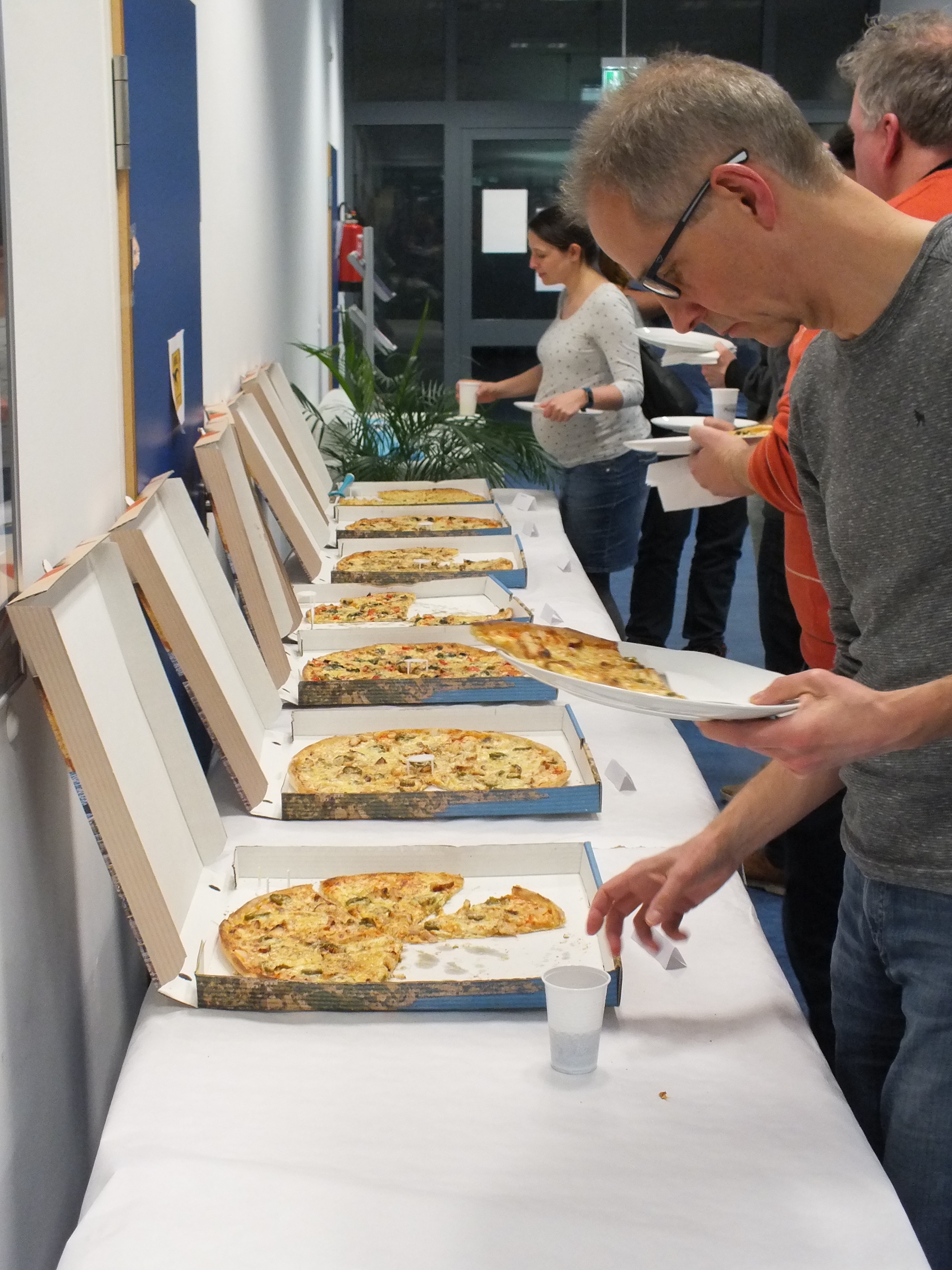 Roger Leifert's vintage Lectron teaching system (in the front), and Cord Elias at his Elektromann (in the back). 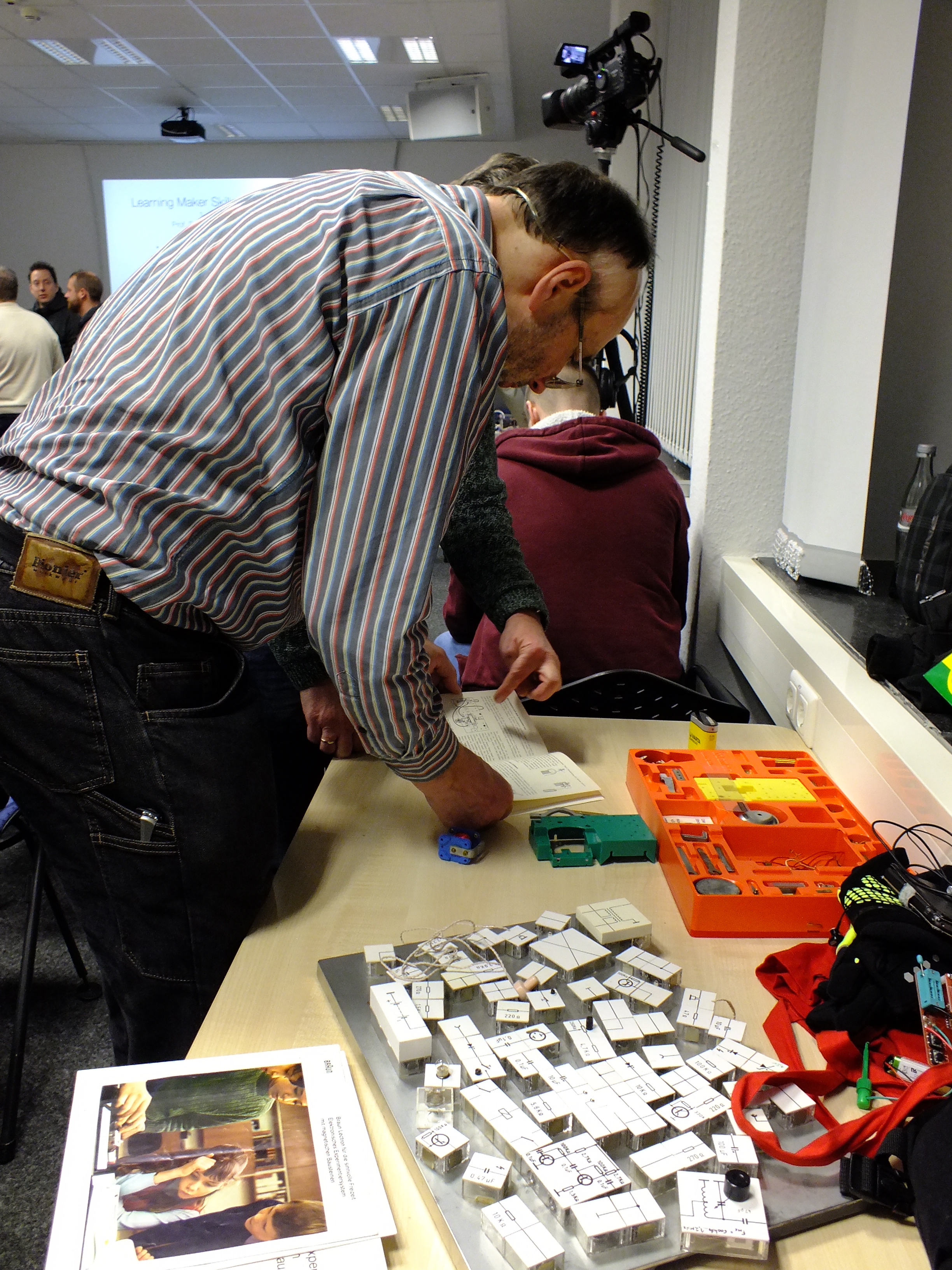 TABULA is a research prototype to teach programming with tangibles on an interactive table. 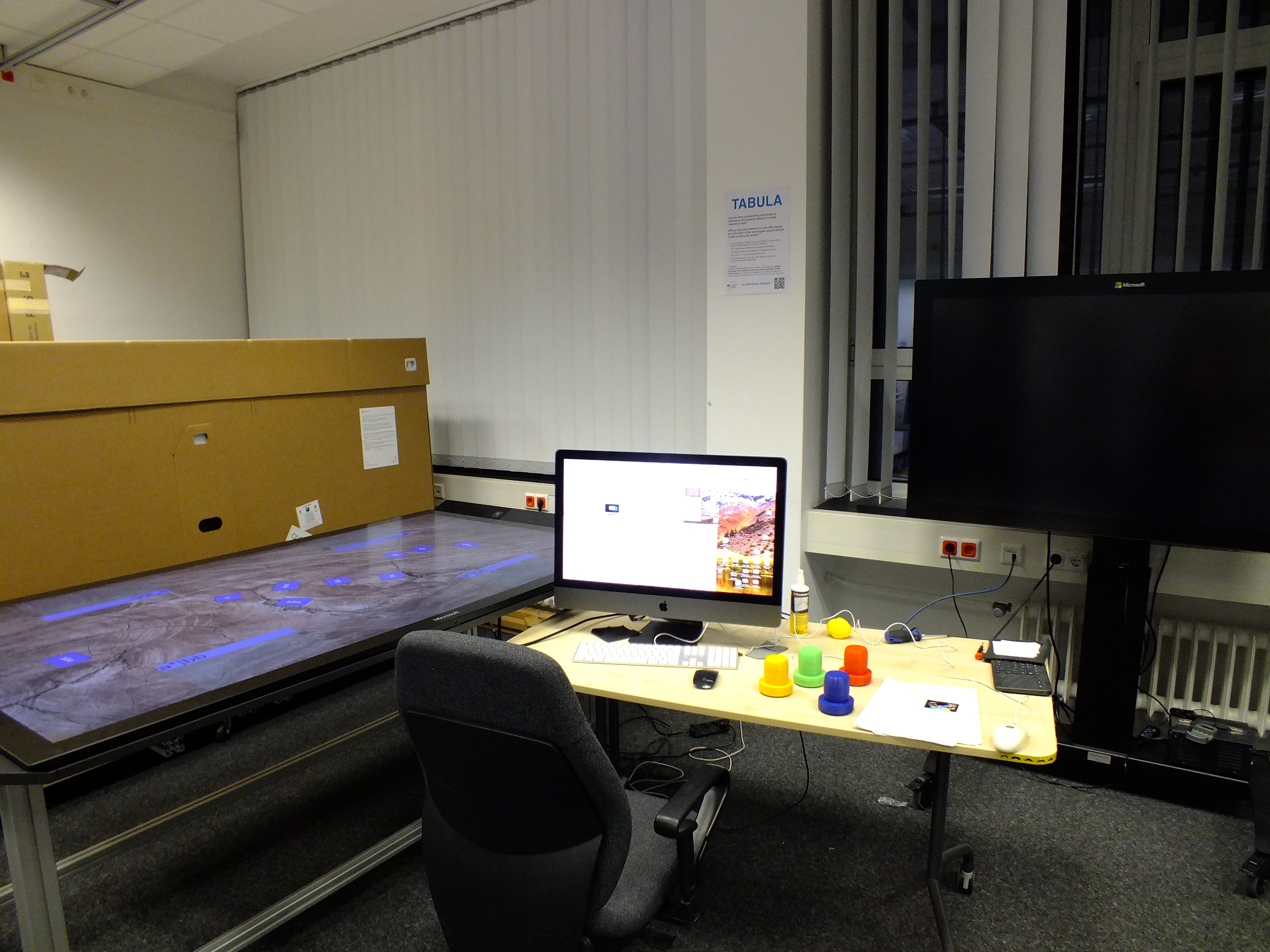 Books to teach you electronics, Arduino programming, and crafting, from the 70's to today. 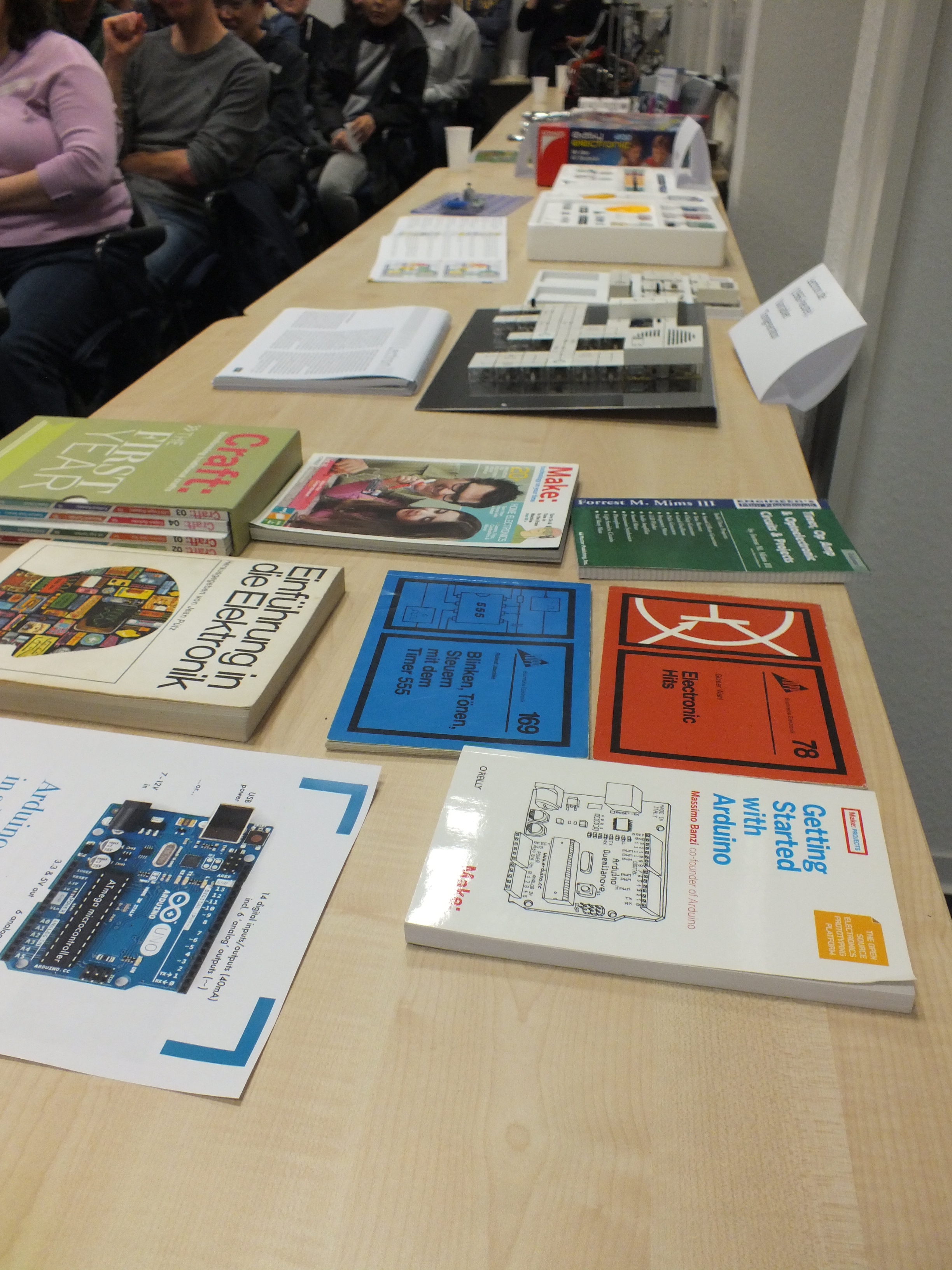 Our participants competing for Frank's giveaways in our impromptu electronics quiz. 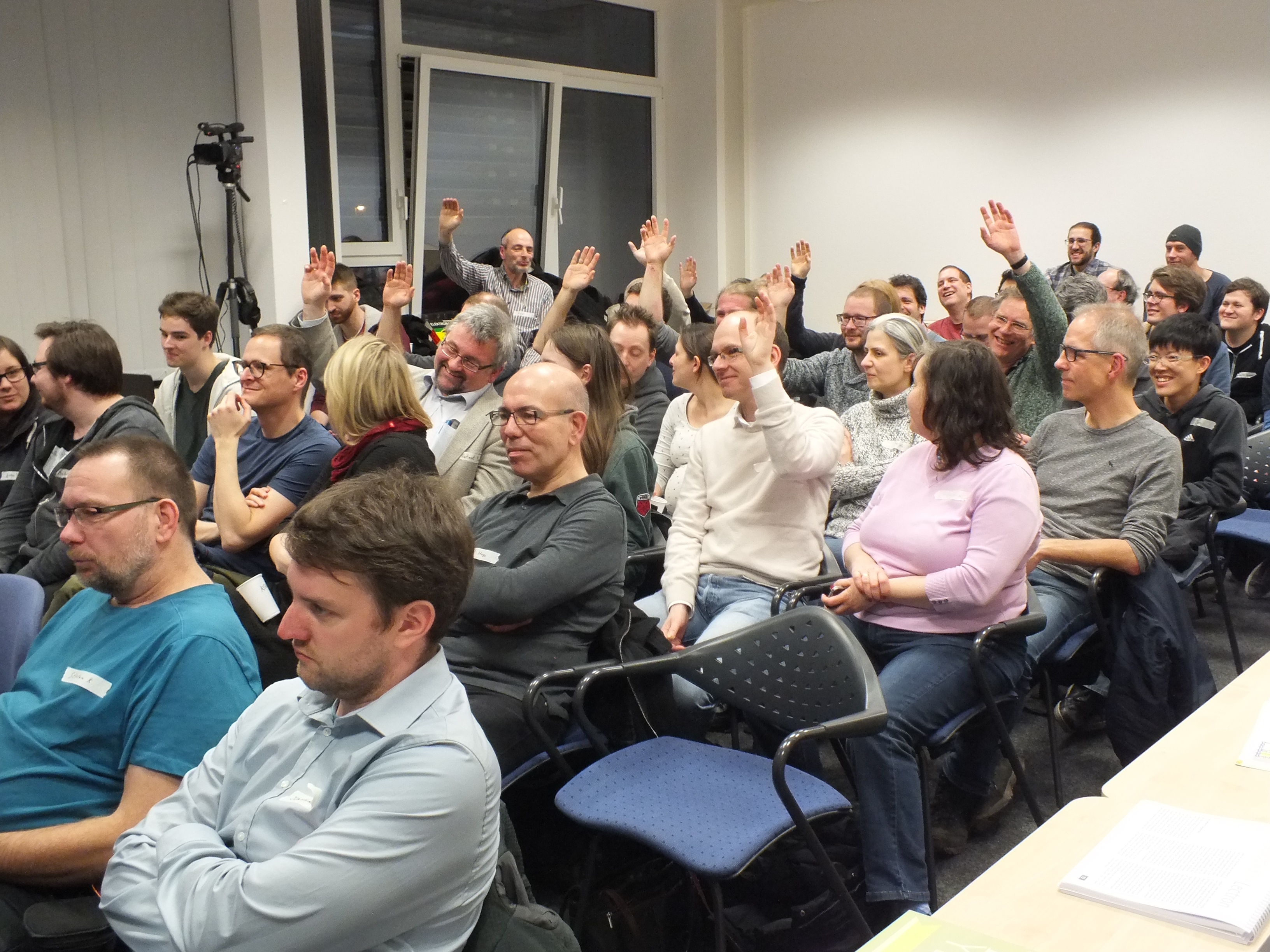 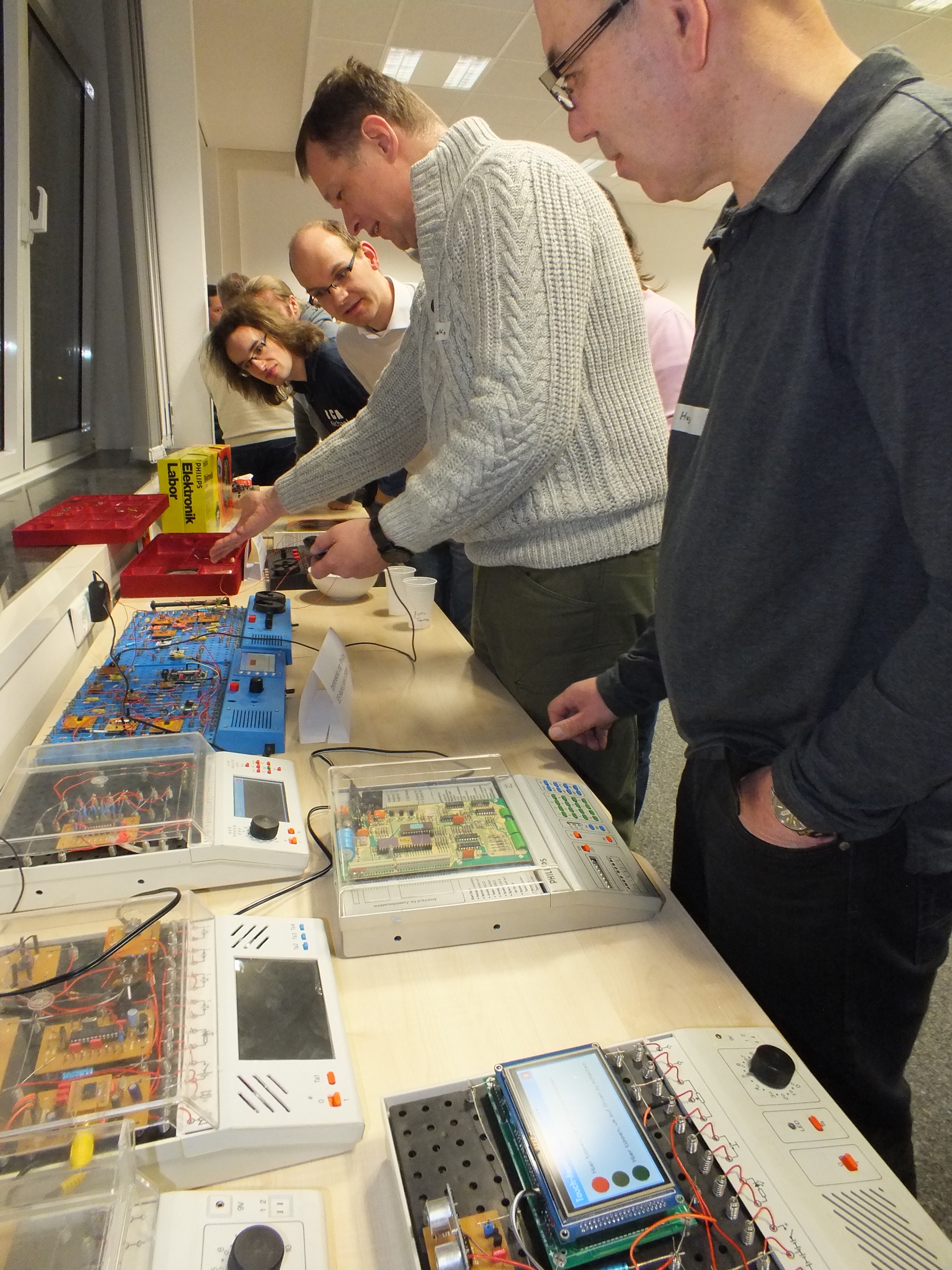 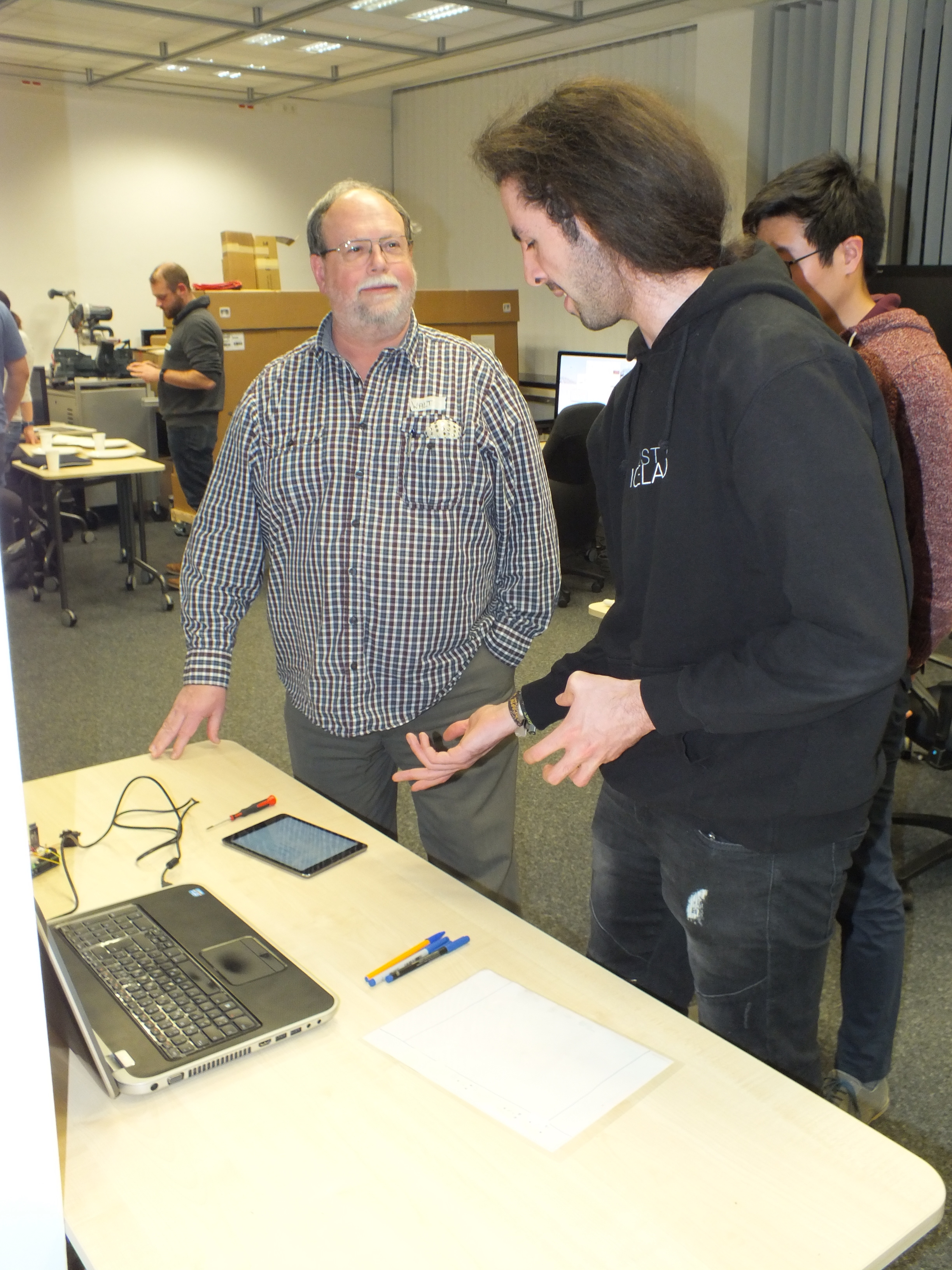 Jan Borchers brought his 1982 Philips EE 2000 GK electronics lab that taught him electronics (and patience) as a kid, restored with modern springs and wires, and complete with retro-style batteries. 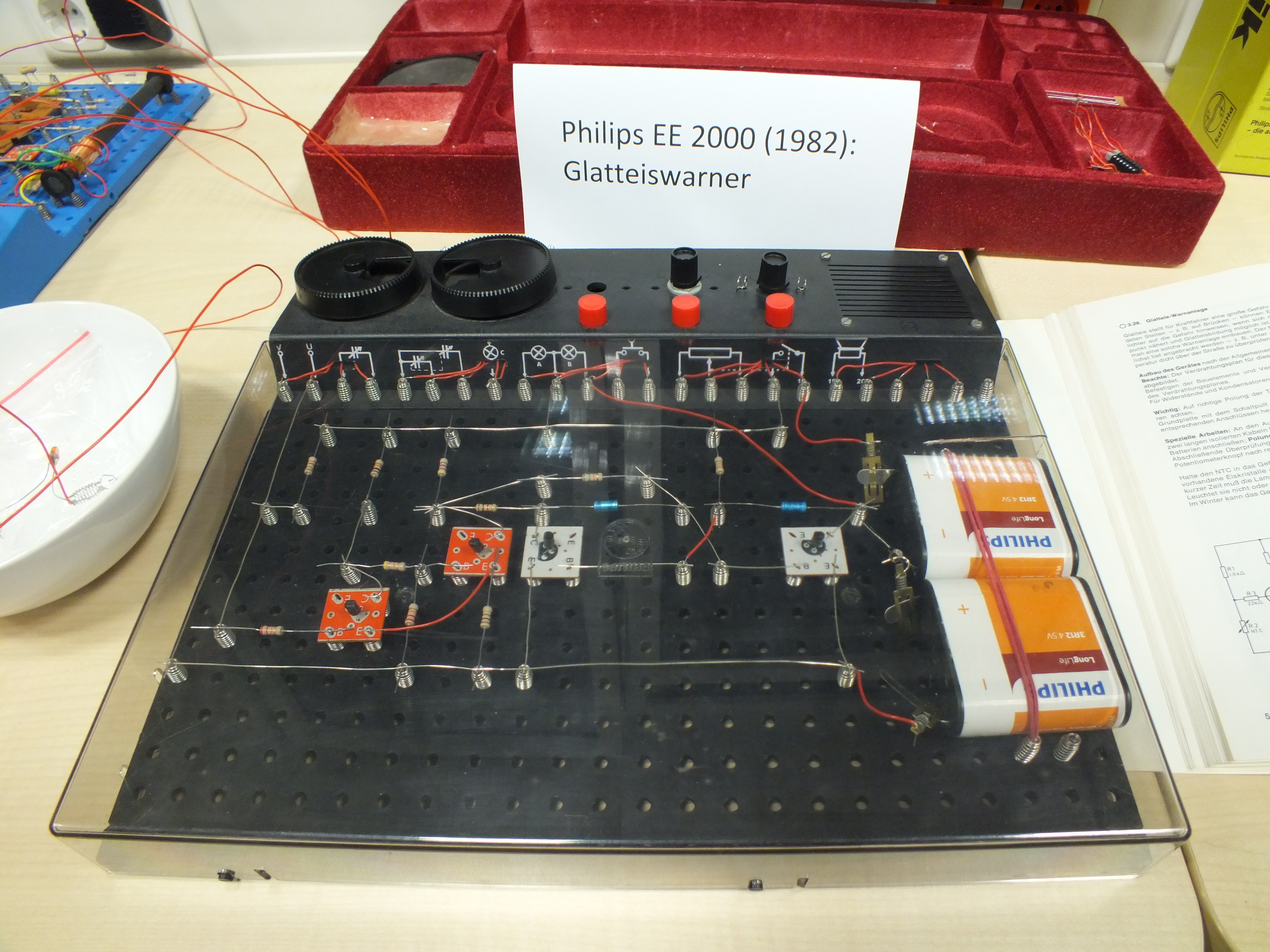 A medium waveband transmitter (left), built using Frank's modified Philips EE 2000 system, provides something for the standard medium waveband radio circuit from the 80's to tune in to in today's times. 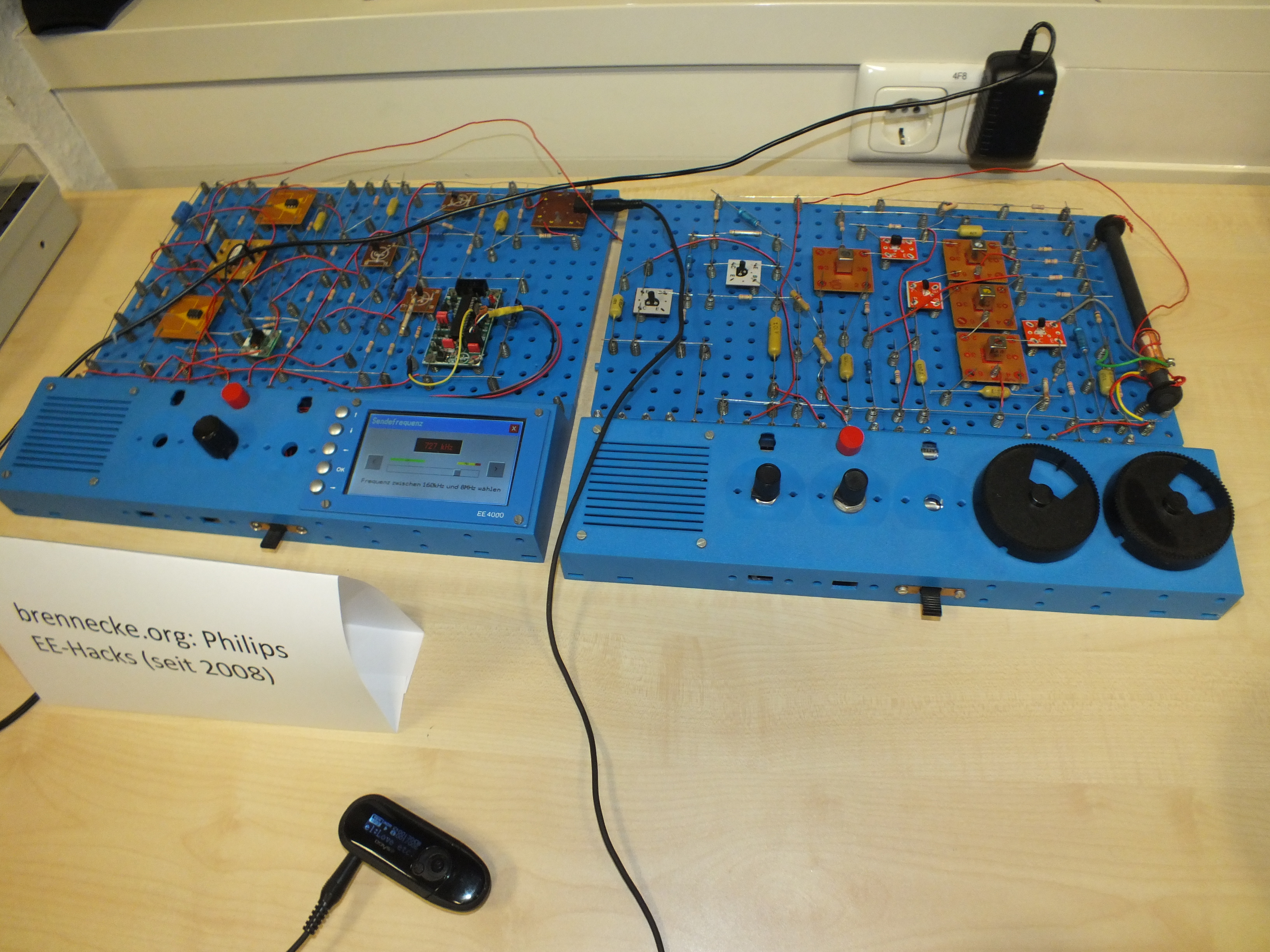 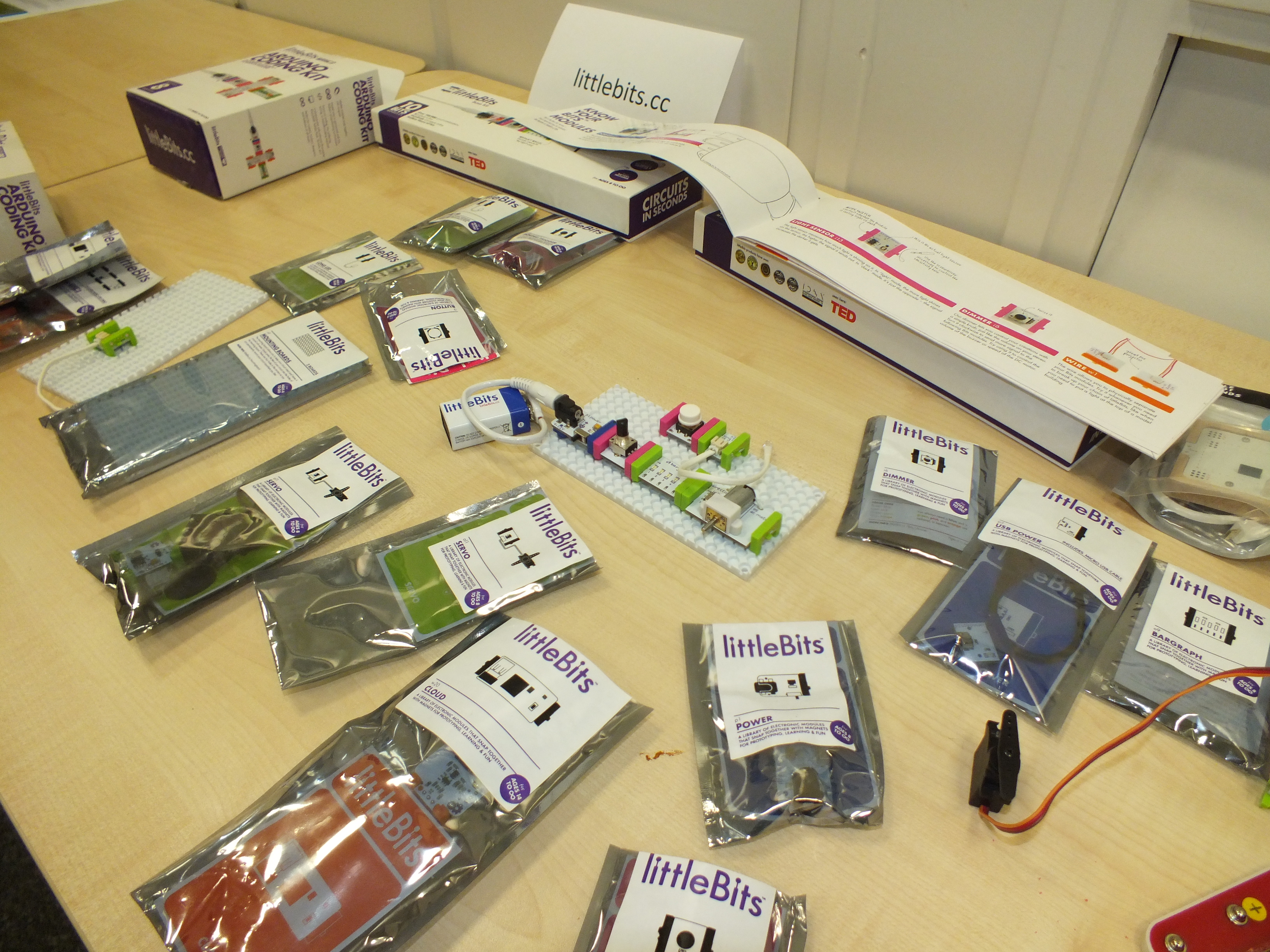 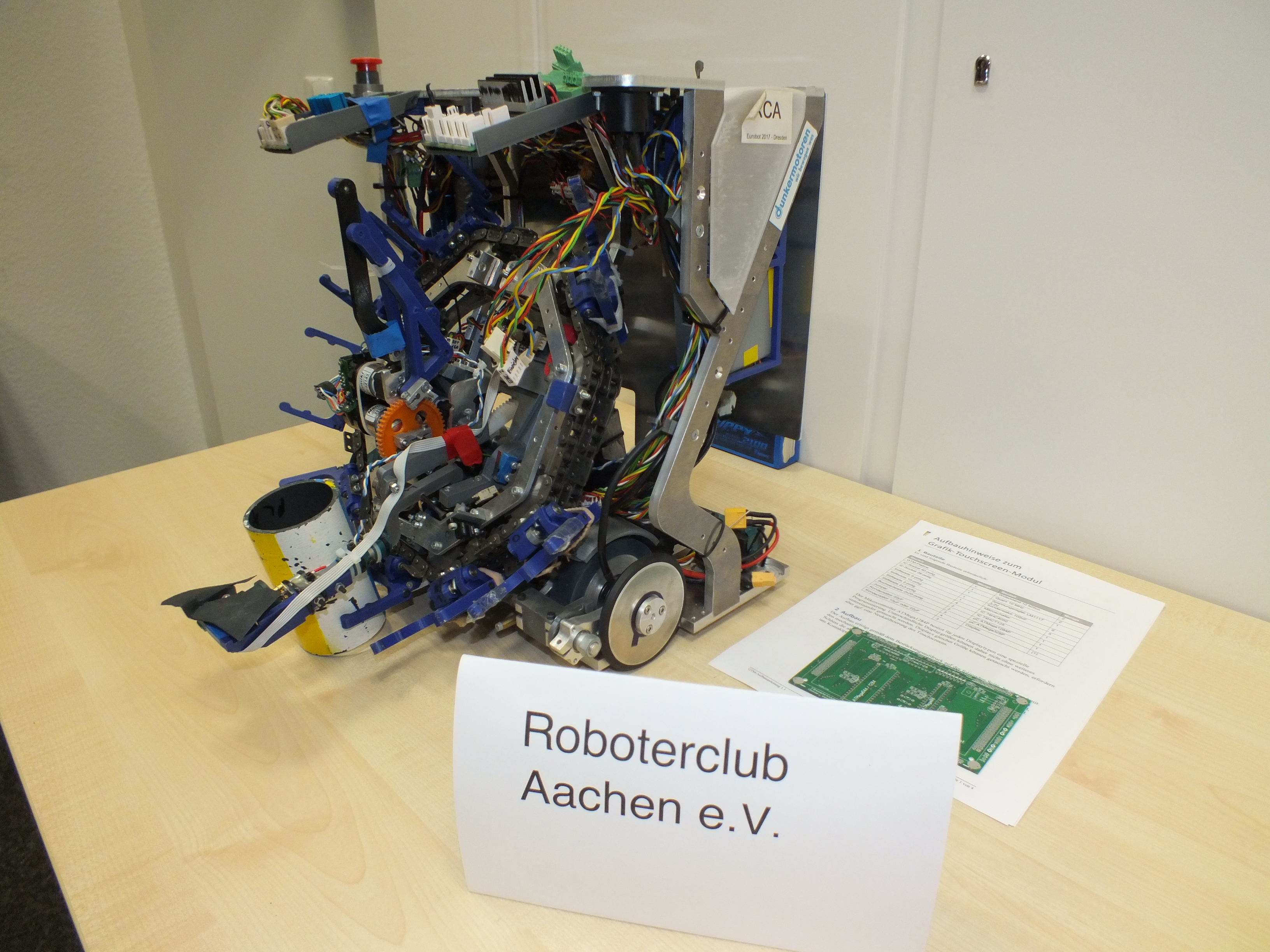 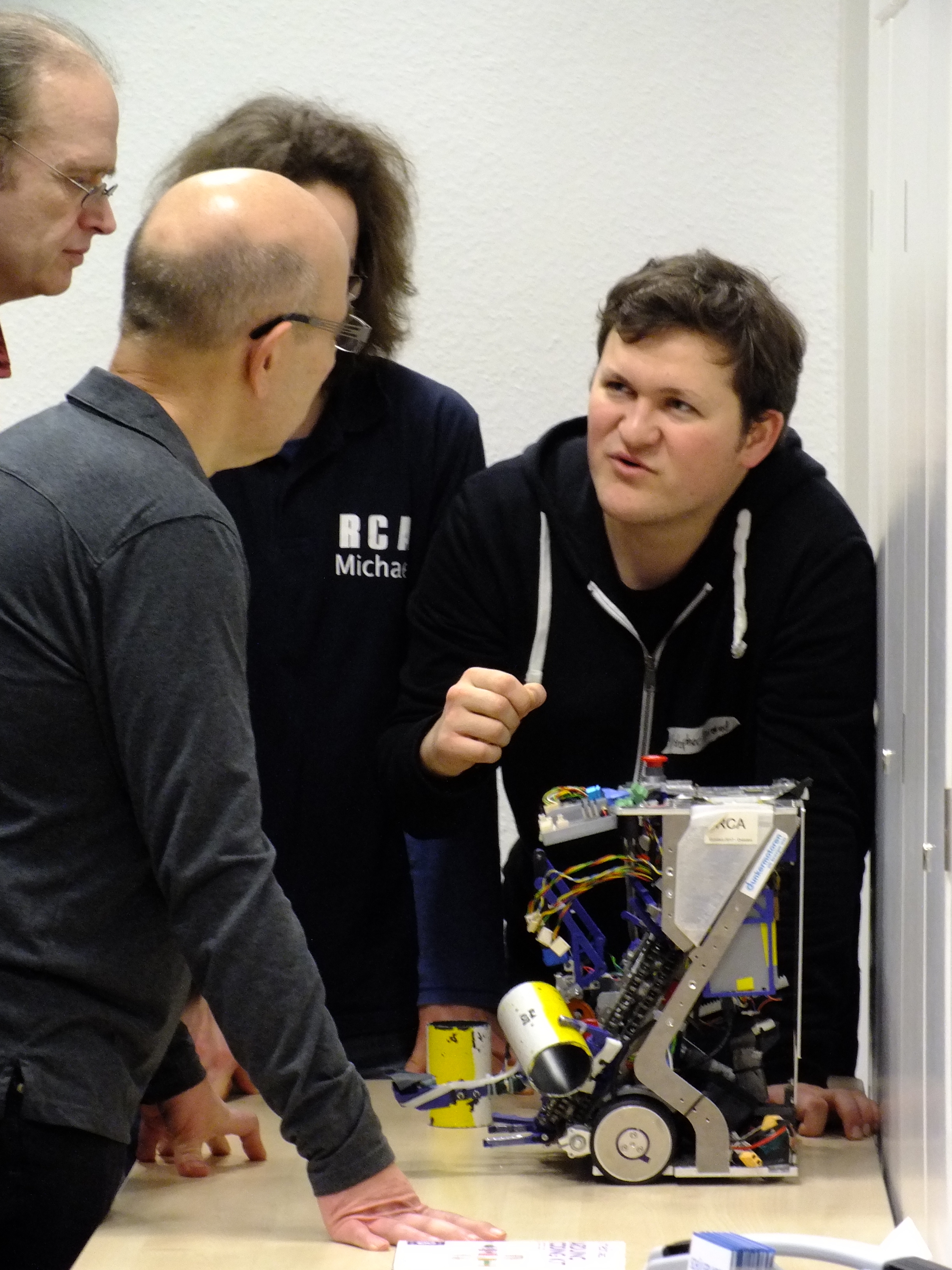 To explain basic electronics in the Fab Academy and other classes, the chair purchased a brand-new Lectron system. The system dates back to the 60's but is still being built and kept up-to-date today. 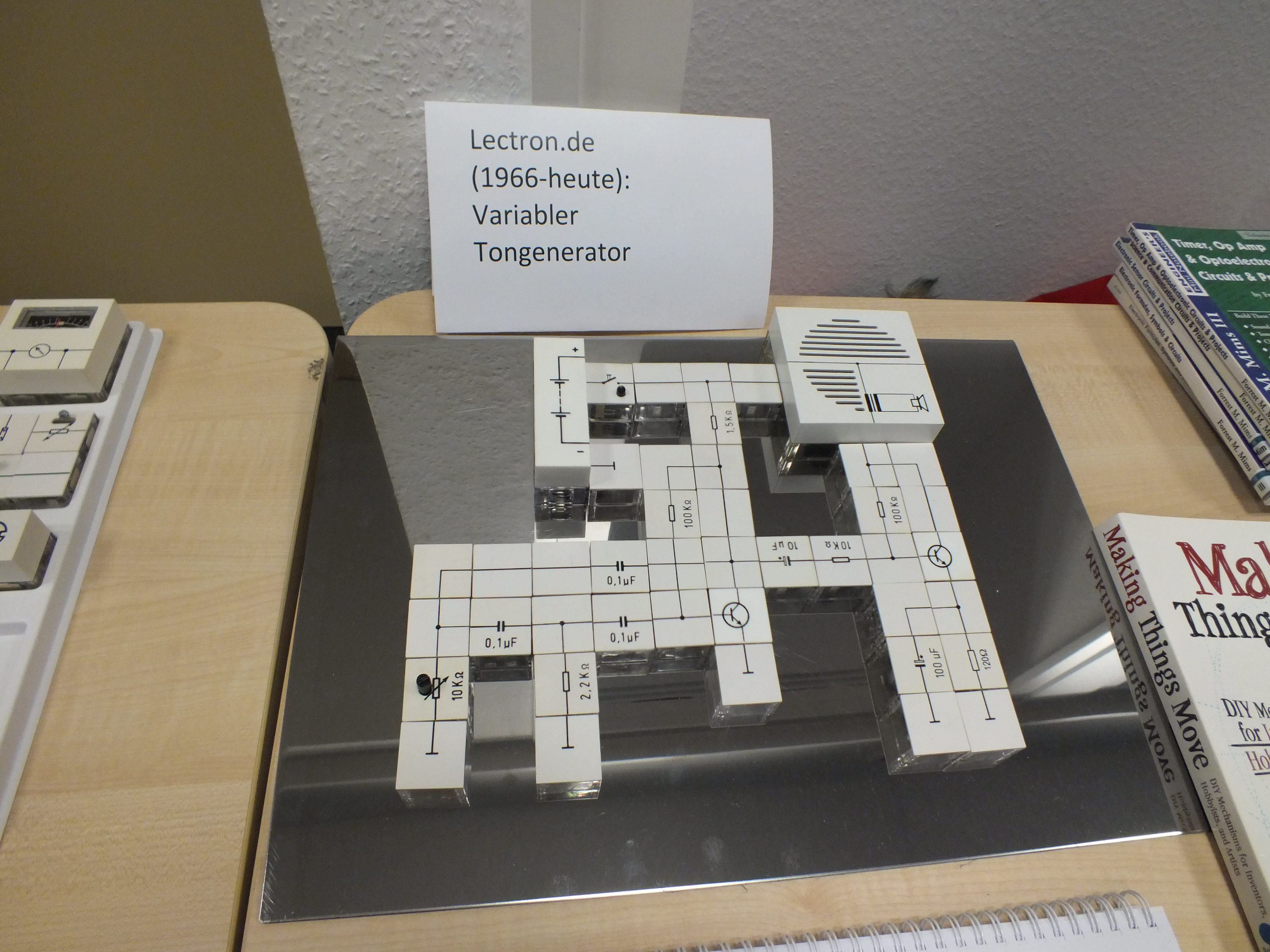 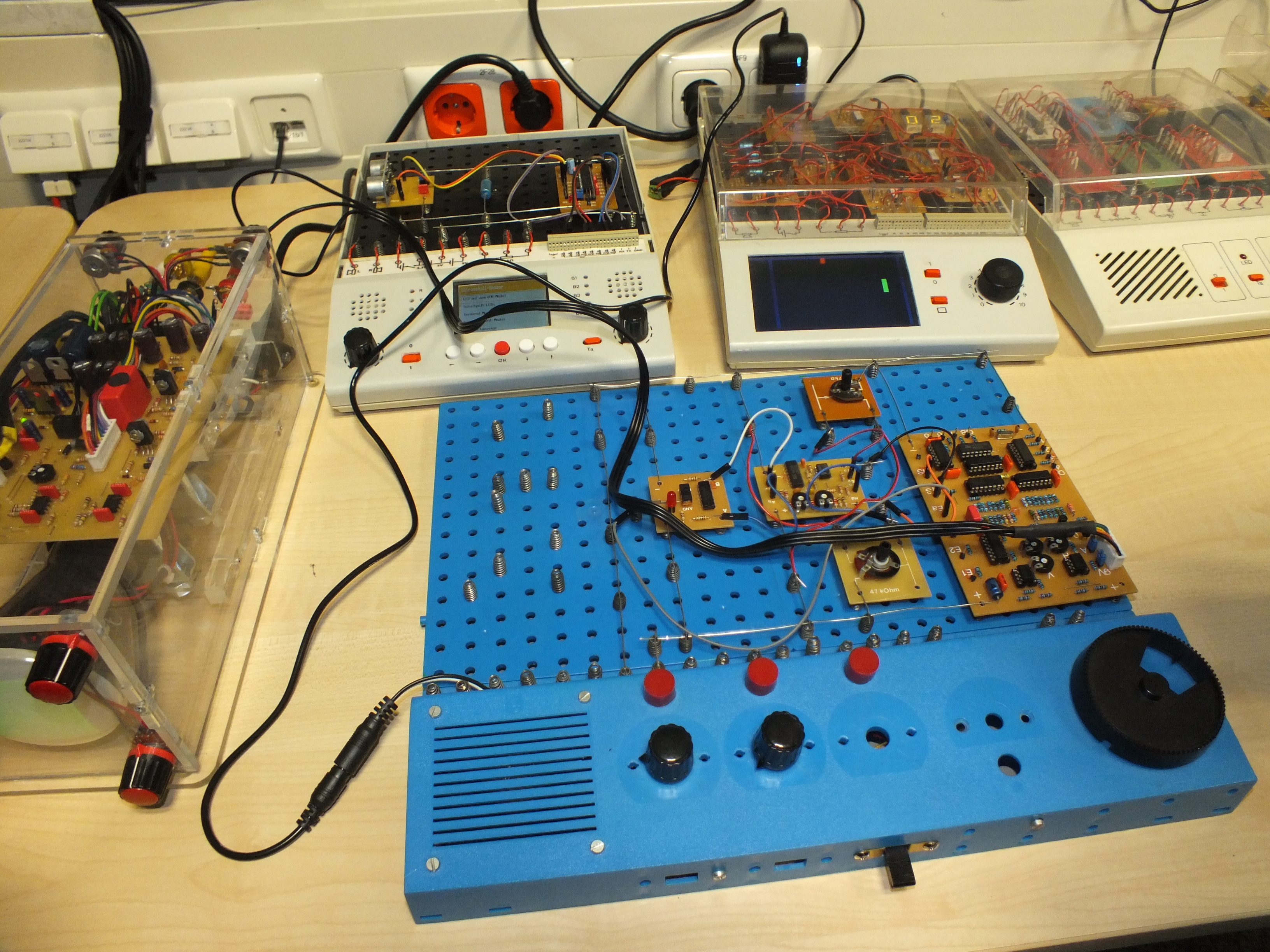 InfoSphere, Europe's largest university teaching school kids computer science, is right here in the CS department at RWTH Aachen University! They brought an environmental sensor kit developed with the BMBF Photonics MakeLight initiative, and a German Calliope board for schools, similar to the BBC micro:bit and the de-facto Maker standard, the Arduino. 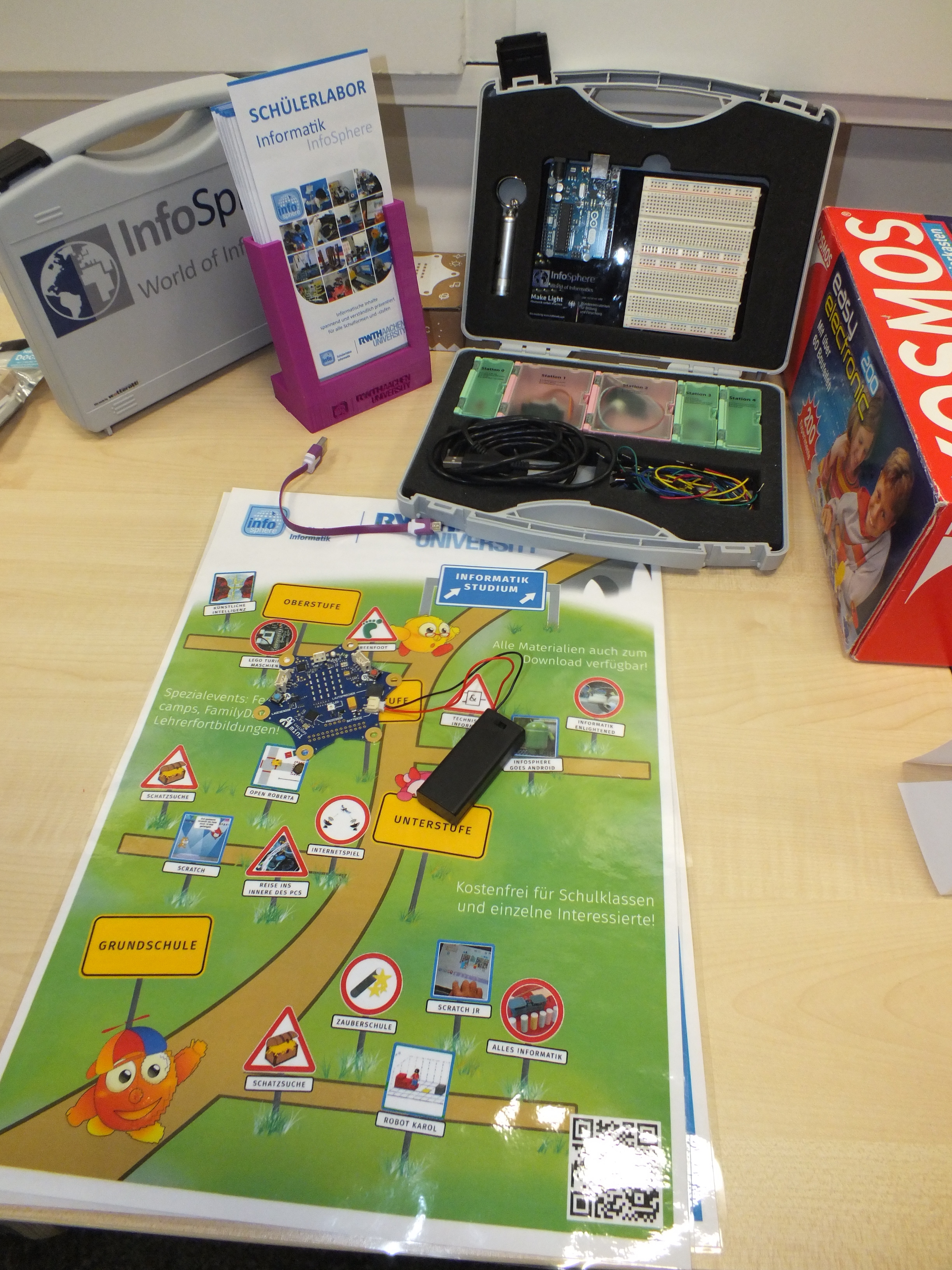 Experiments with the Photonics tools for Makers from the BMBF MakeLight Initiative. The project is called Bakaros, and the presenters came all the way from Stuttgart to Aachen for the evening. As soon as they have a website, we will add a link here. This project creates maker tools and experimental kits focusing on optics. 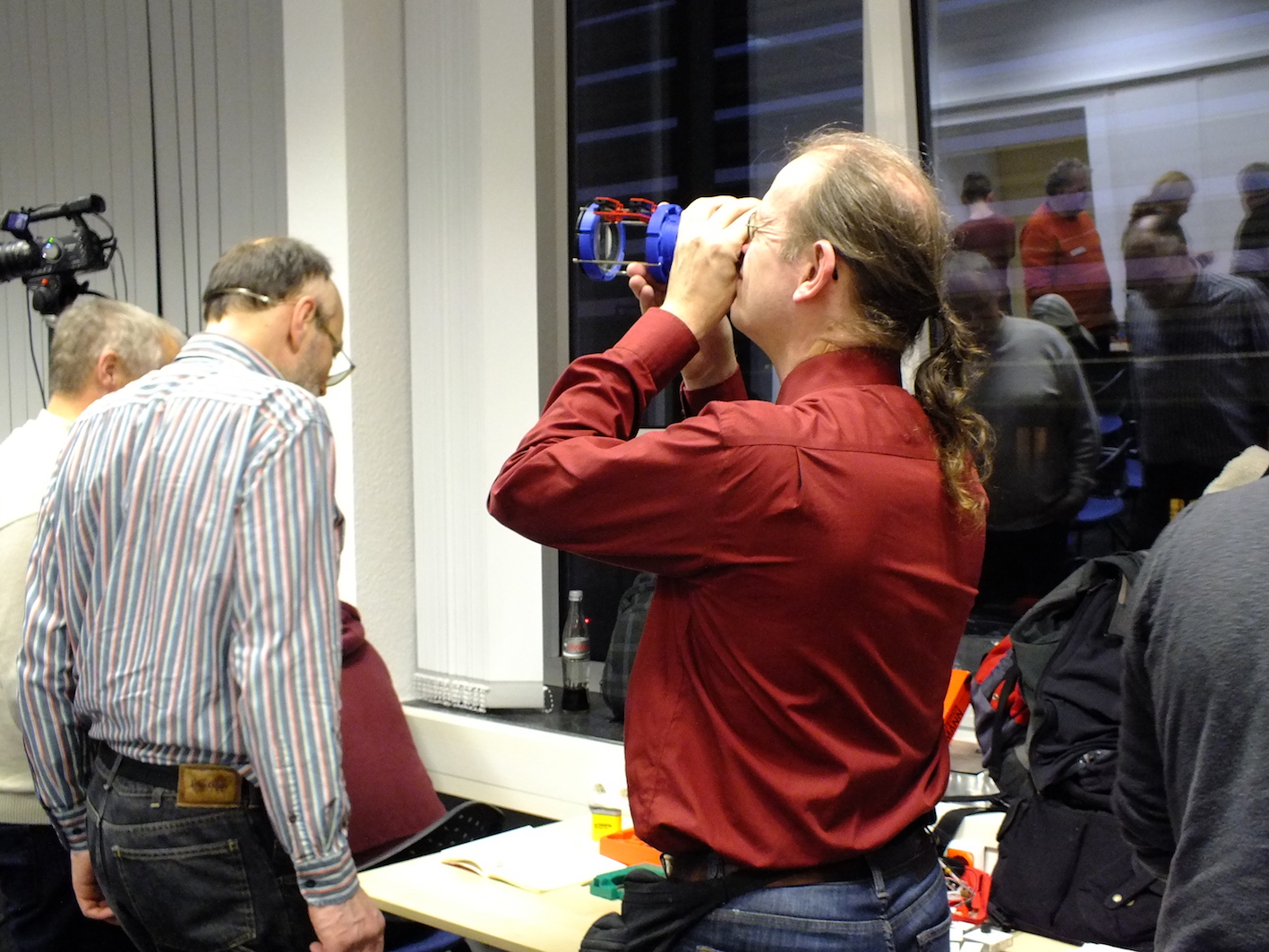 The pictures below shows the variety of the devices that have been built in the Bakaros project. You can see telescopes, microscopes, etc. 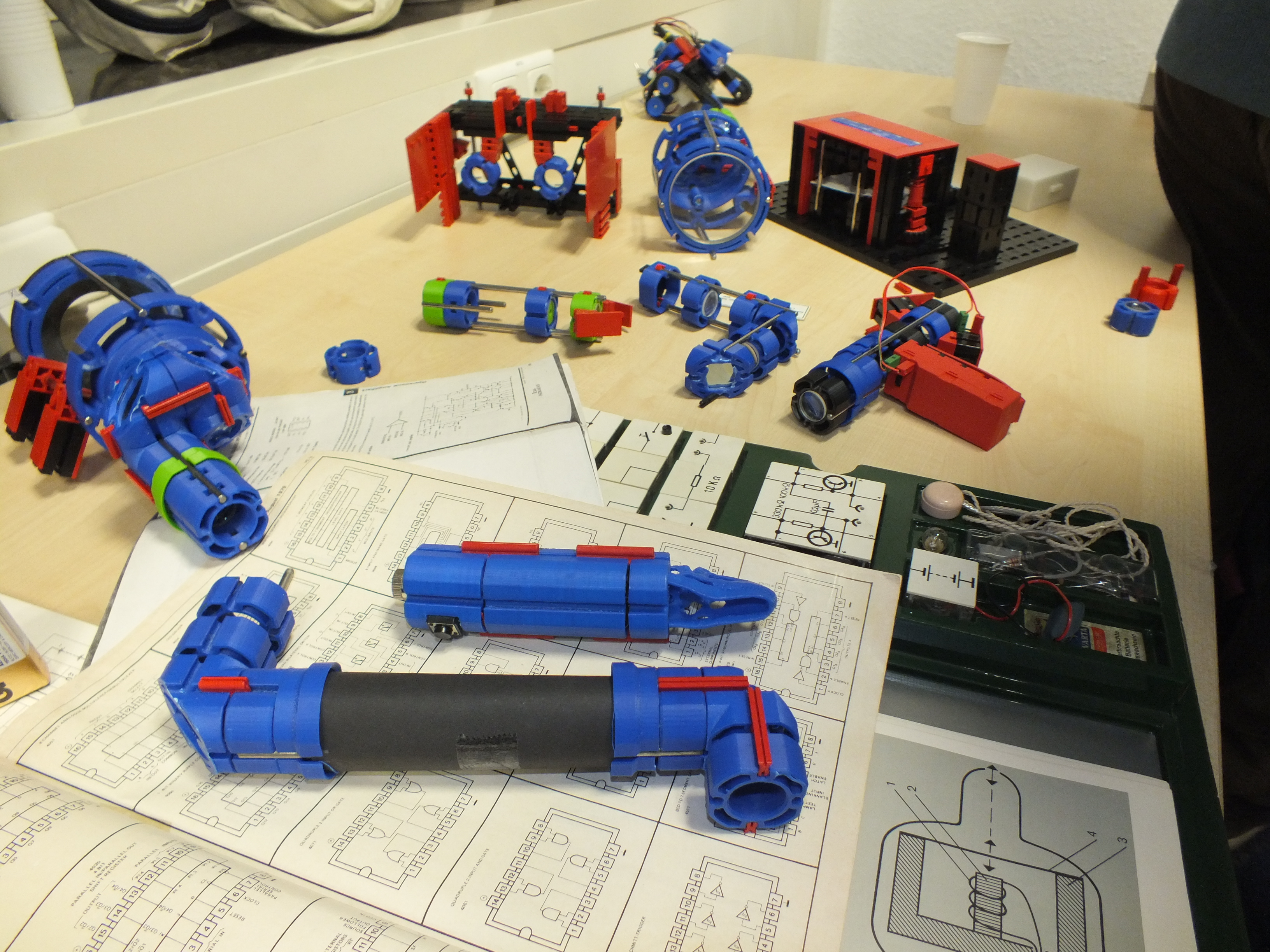 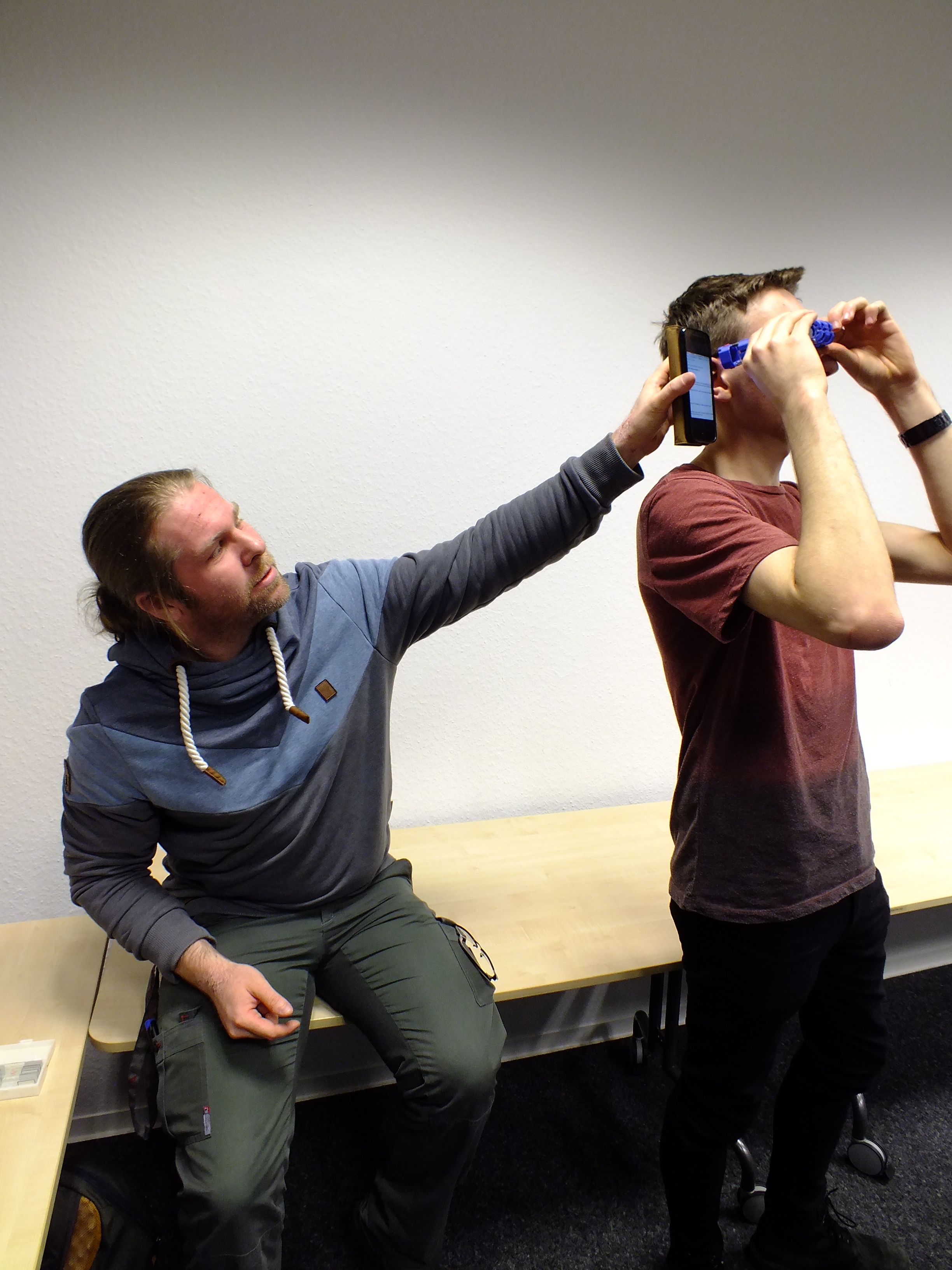 The telescope of the Bakaros project. 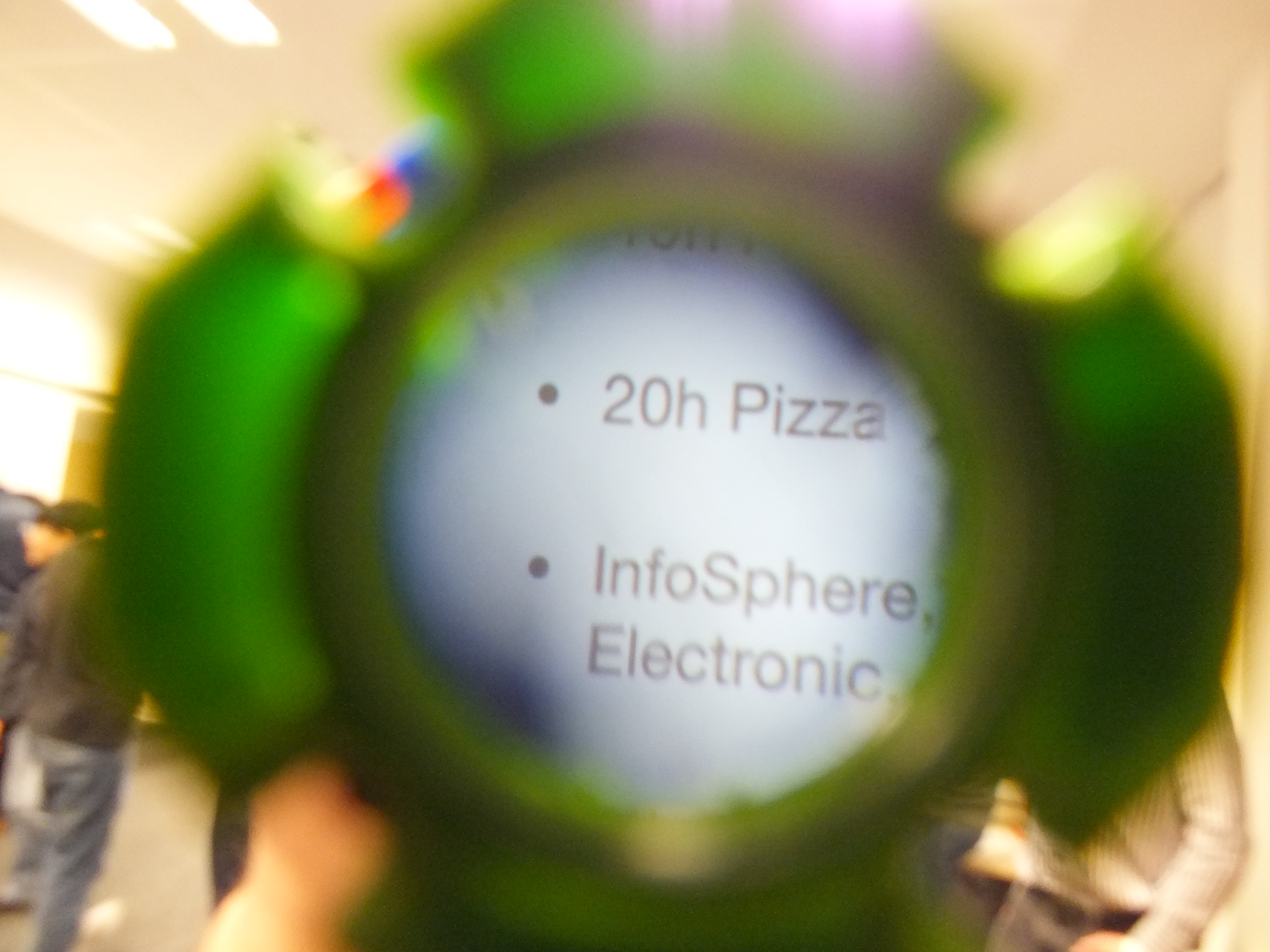 The VR glasses of the Bakaros project. 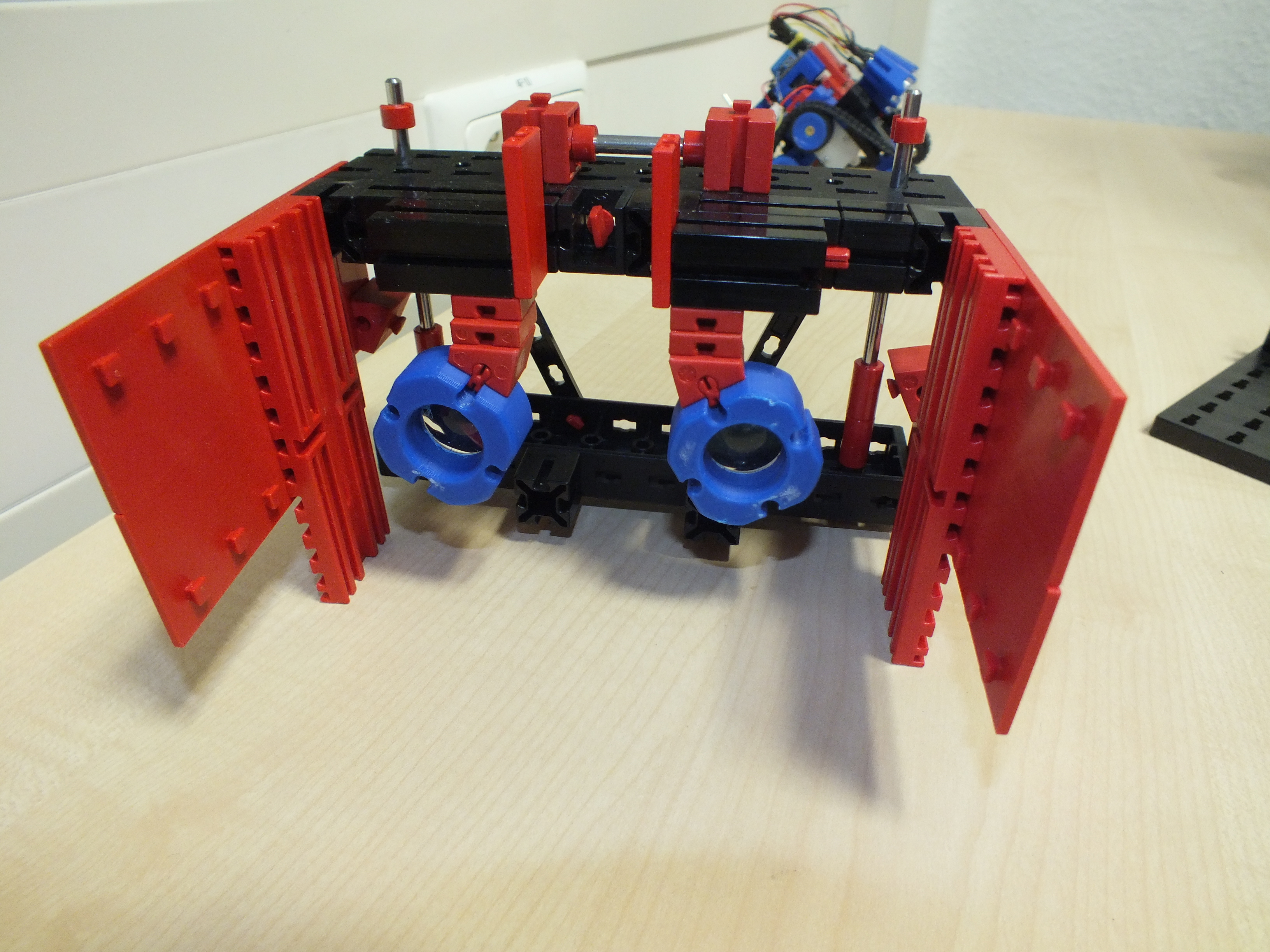 Some more impressions from the evening. 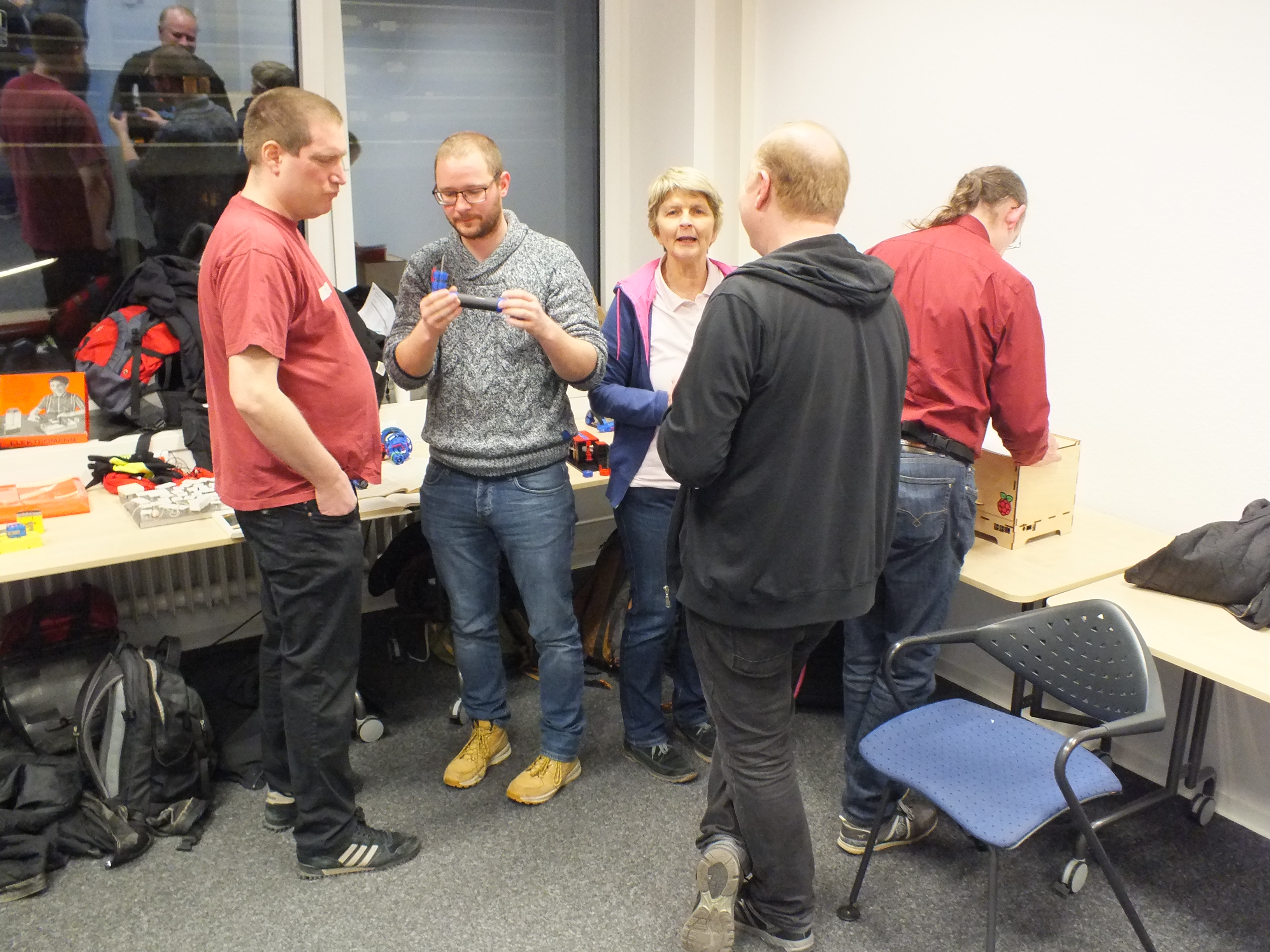 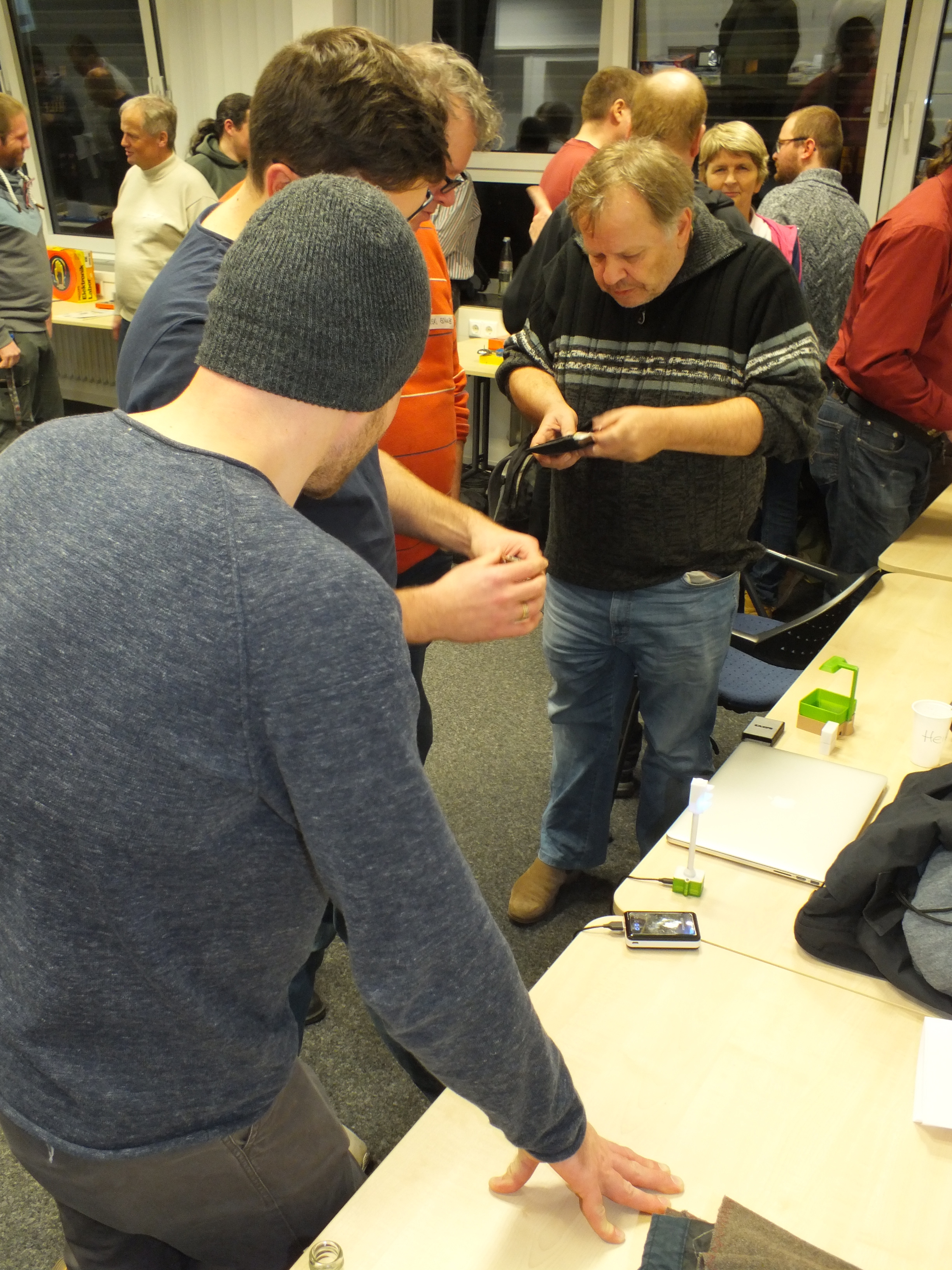