Bridging the Gap Between Virtual and Physical Controls on Tabletops

You find a one-page non-geek version here (PDF, 804 KB).
Physical user interface components such as buttons, sliders, knobs, and keyboards have many advantages: thanks to their haptic nature, they are easy to operate without looking, and their shape guides the user's input gestures. However, they are often expensive, and it is hard to change their labeling on the fly. Computer interfaces have largely replaced these devices with virtual on-screen controls, such as push buttons, scrollbars, rotary knobs and soft keyboards. Virtual controls are very flexible, easily changed dynamically - but they lack the physical, haptic texture and feedback of their real-world counterparts.

Our Silicone ILluminated Active Peripherals, or SLAP widgets, are physical widgets made from silicone rubber and acrylic that combine the advantages of physical and virtual devices: Our SLAP buttons, sliders, knobs and keyboards have the physical shape of real devices to provide the right haptic feedback, but are still easily relabeled using a tabletop rear projection. At the same time, they are particularly low-cost, and easy to put to use. 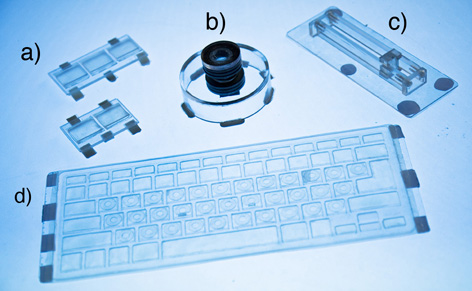 
SLAP widgets are transparent. This means we can always show the current labeling using the table's rear projection underneath the widget. For example, we can change the labels on our keyboard from normal characters to shortcut commands when the modifier key is held down. This makes it easier to use command shortcuts and other special keyboard mappings.

But SLAP widgets are still physical, simplifying their eyes-free use.

SLAP is a cooperative research project by Malte Weiss, Julie Wagner, Yvonne Jansen, Jan Borchers from the Media Computing Group, as well as by Roger Jennings, Ramsin Khoshabeh, and Jim Hollan from University of California, San Diego. It is funded in part through the German B-IT Foundation, NSF Grant 0729013, and a UCSD Chancellor's Interdisciplinary Grant. Special thanks to our student assistants Florian Schwarz and Stefan Hafeneger for their programming support.

Each SLAP widget, like a keypad for example, has visual markers on its bottom side. When put onto a table, the markers are registered by the table using a technique called Diffuse Illumination, or DI.

In the figure below you see the footprint for keyboards and knobs as image captured from the camera and from the perspective of the user.

The back of the table surface is flooded with infrared light, and a camera, also beneath the table, detects the light reflected from the markers. Our SLAP software toolkit recognizes the unique footprint of each device.


When SLAP widgets are pressed like for example the keypad, keyboard, and knob, however, there is no additional marker to detect. Instead, a different technique called FTIR, or frustrated total internal reflection, is used: IR light fed sideways into the tabletop stays inside the acrylic surface until disturbed by touch. The camera beneath the table detects the point of touch from the scattered IR light.

SLAP widgets, like our knob, create a pulsating halo around them when placed on a table, indicating that they are ready to be paired to an on-screen target object, such as a movie window. Pairing is carried out by simply double-tapping the SLAP widget and target in parallel.
The halo turns into green if the connection can be established or into red if not, to give visual feedback. Now the widget can be used to manipulate the on-screen target object.

In all, SLAP widgets combine the strengths of physical and virtual input devices. They are particularly simple and affordable, making them suitable for research and prototyping scenarios. We hope others will join us in further exploring this new kind of input devices for future tabletop interfaces.