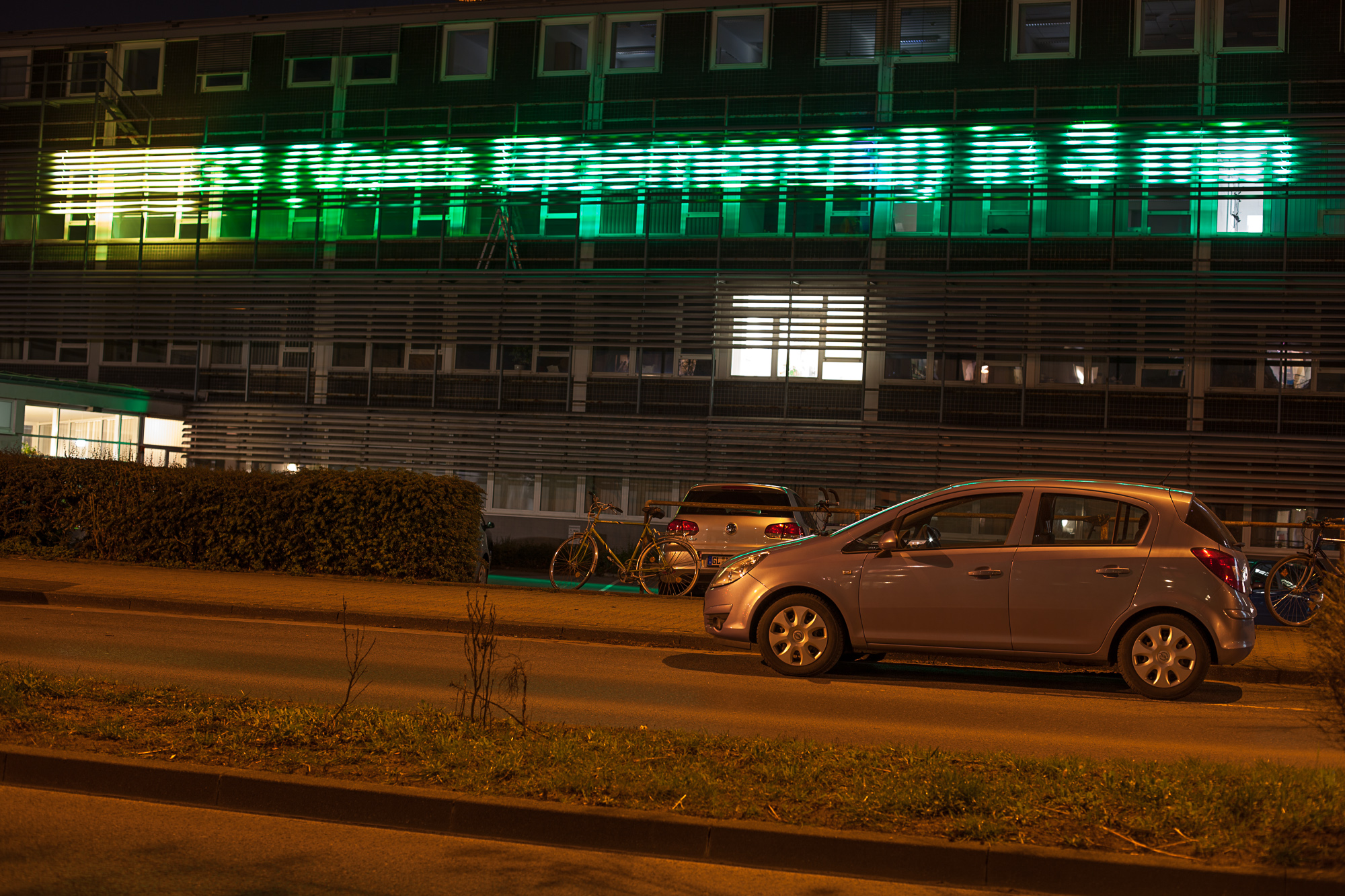 The iWall was an interactive light installation that opened up new opportunities in Smart Lighting research, teaching, and development for researchers, students, artists and makers. It was installed high up along the entire façade of the Computer Science building at RWTH Aachen University, facing Halifaxstraße. The iWall installation opened to the public in December 2013. It was on display until 2022, when the sun protection panels were removed to make room for a renovated façade.

The iWall was designed so users could interact with it outside the building using their mobile devices. The iWall was part of the Aixplorer project that was working on future approaches to city guide systems for tourists. Interactive façades are becoming commonplace in urban spaces, and future mobile city guide systems have an opportunity to use such displays to provide additional channels for information, art, and entertainment to tourists.

Why the iWall for Smart Lighting Research?

The CS building is a protected historical building from the 1950s that used to host the "Pädagogische Hochschule", so special care was taken to find a solution for designing and installing the iWall so that it was completely invisible when looking at the façade during daytime. Only at nightfall, the illumination became noticeable. Even then, the iWall did not use direct LED point lights which would have created a cheap, amusement park-like look. Instead, its LEDs were mounted behind the permanent sun reflector panels that spanned the entire width of the building. The LEDs pointed downwards at an angle, thus indirectly illuminating the street-facing outside of the next sun reflector panel below with a soft glow. This created larger, more subdued and elegant illumination effects and a spatially continuous impression.

The building constraints led to an unusual format for the iWall: With a dot pitch of about 3 cm over the width of 60 meters, it featured 1920 RGB LED pixels of horizontal resolution, while the existing sun reflector structure only allowed for 10 RGB LED pixels of vertical resolution at a dot pitch of about 20 cm, for a height of about 2 meters. This unique format — FullHD horizontal, but only 10 pixels vertical — challenged the designers of content and interactive applications for the display. At the same time, this elegant "illuminated band" perfectly fit the existing architecture, underlining its original design intentions.

The iWall was not just a passive, automated display showing meaningless animations, however. Instead, we created an API and programming interface so that researchers, students, artists and makers could turn the iWall into a tool for their own ideas and projects. The entire array of 20,000 RGB LEDs could be individually controlled at framerates fast enough for completely smooth animated effects. A first workshop for these developers was included in this project. Here are just some sample ideas for directions that projects using the iWall could take:

We knew that students, artists and other makers, given the opportunity, would come up with countless even more creative ideas to breathe life into this unusual display.

During one annual "Tag der Informatik" graduation party, for example, we turned the iWall into an interactive chat board that users could send messages to using their smartphones.