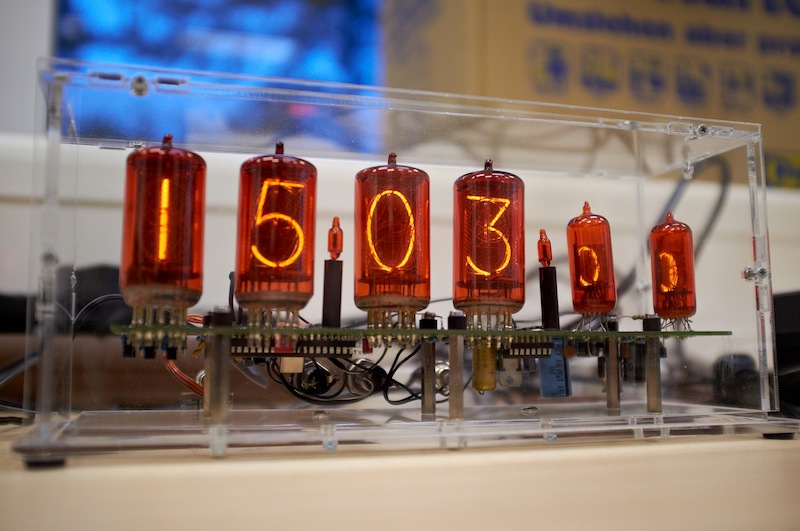 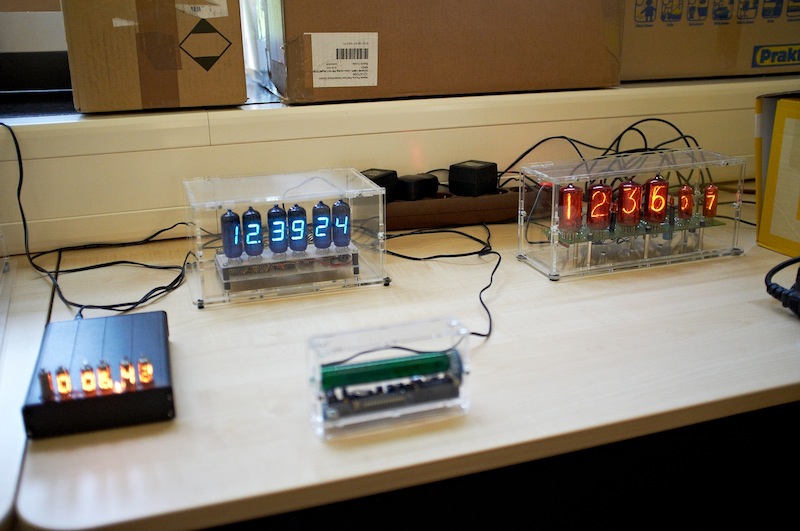 He gave a short presentation about different technologies that were used in the past for displaying numbers. 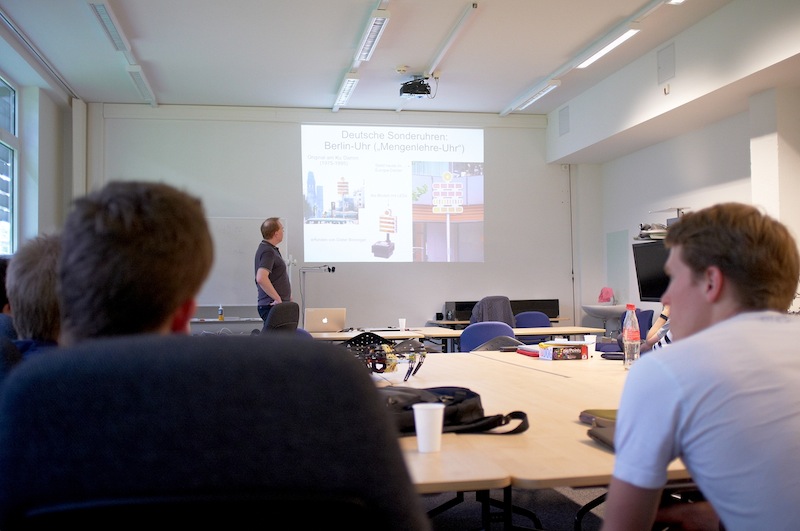 One example is the "Mengenuhr". Originally, it was placed at the Ku'damm in Berlin, but Roger brought it (a miniature model) to dorkbot Aachen. 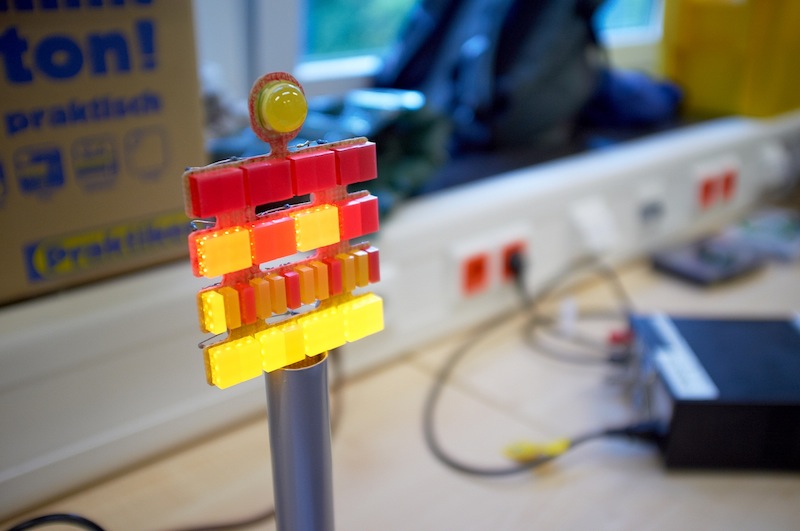 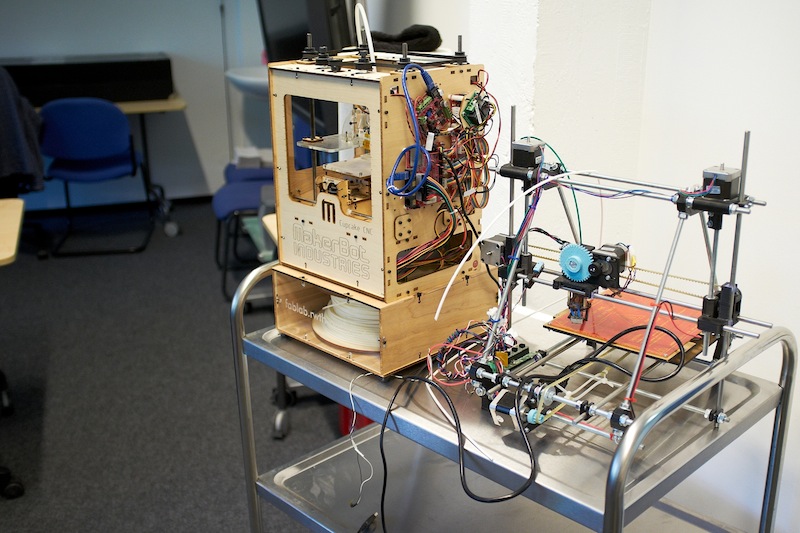 The Wanderkiste Salzgitter was at the meeting. People took out some electronic parts and put other parts back in. We have to send the box to the next person soon. 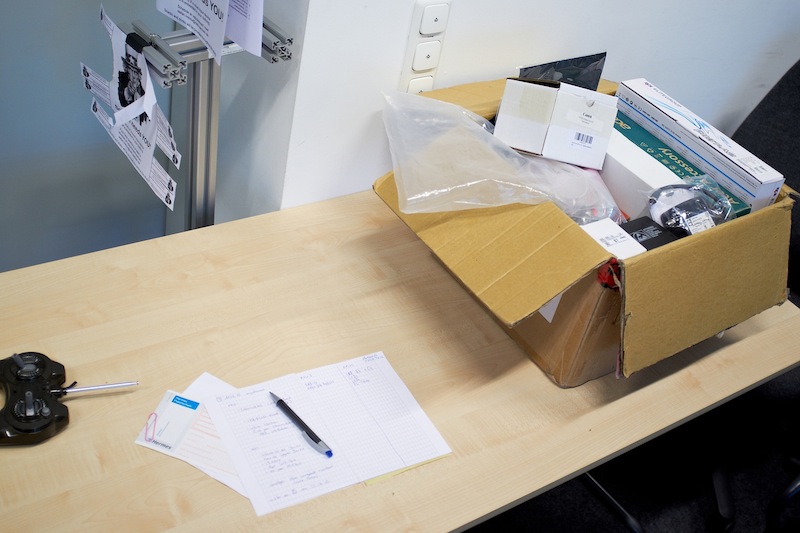 Mario presented his famous Toilettenpapierdrucker. It was traveling all around the nation since he did win a price (Mach flott den Schrott) earlier this year. It was build from spare parts of old printers and other electronic products. 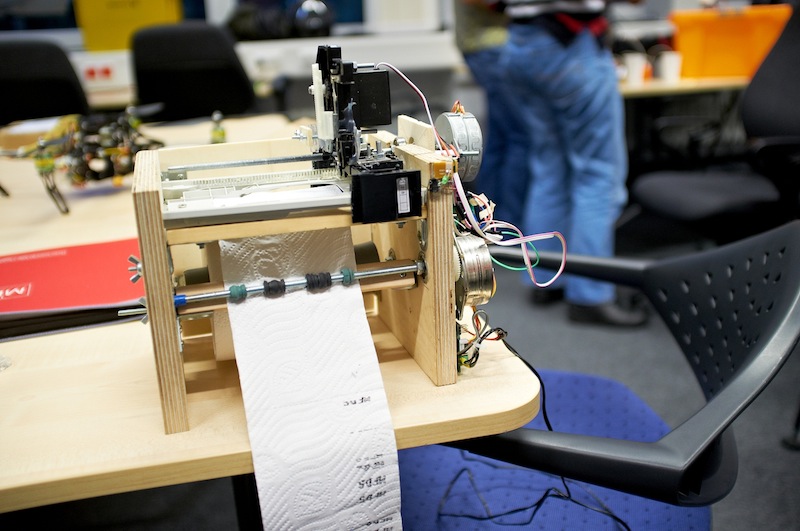 The CAAD RepRap was printing live. It is the most advanced RepRap that was build at the 3D Meisterklasse in 2011. 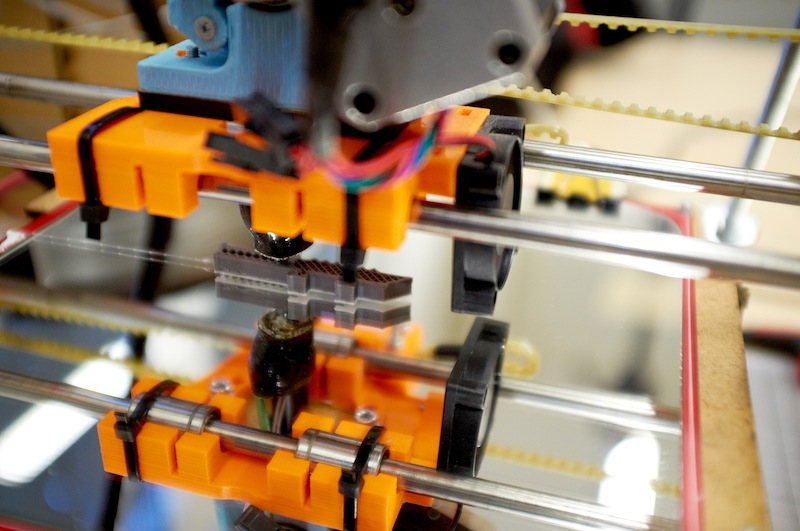 One of the objects that the CAAD RepRap printed: "Blendendose" 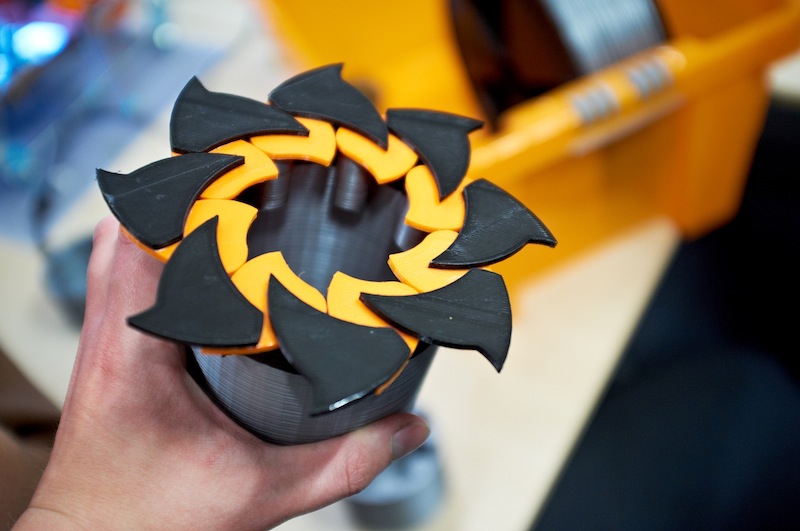 Birgit used the lasercutter to build this dice box. The idea is quite simple: if you throw dice on a table, they fall to the floor. The dice box avoids this - you just put the dice in the top of the box and they end up aligned at the bottom. Clever idea! 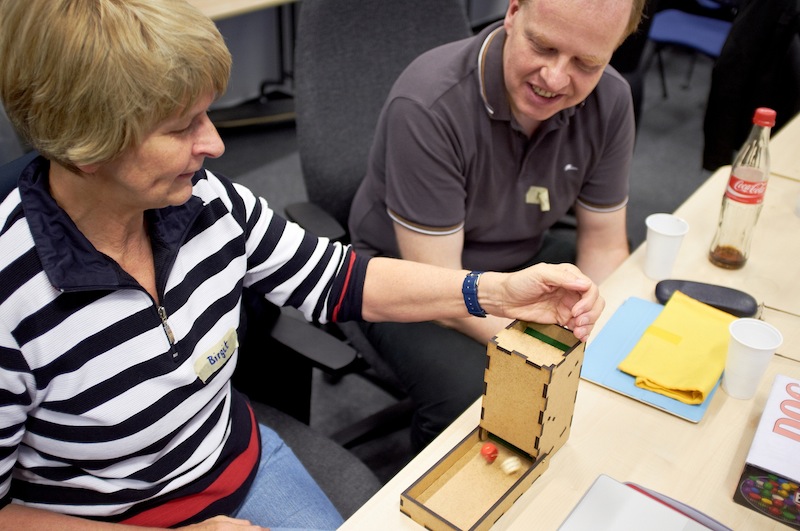 If you have dice, you also need a board game. Birgit created a few boardgames in the fab lab. 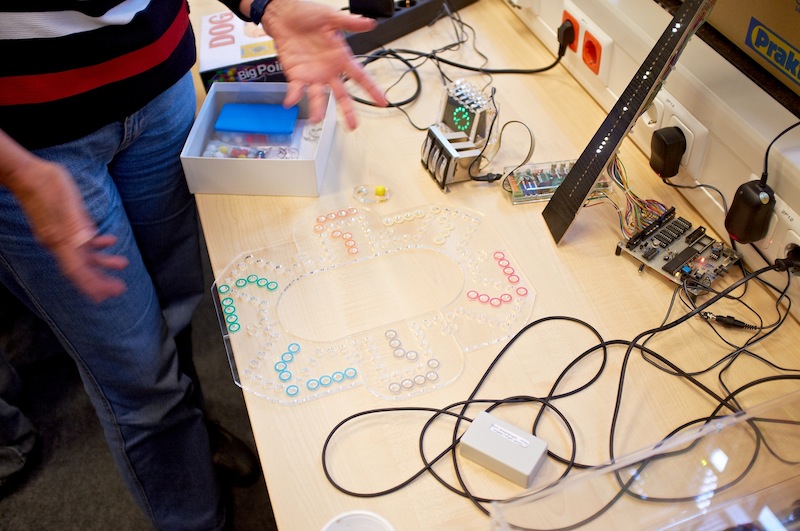 Claudia is from a student team who creates THE intelligent fridge. She used the lasercutter for cutting many layers of acrylic sheet for the sensor box. This box detects if bottles are added or are removed from the fridge. 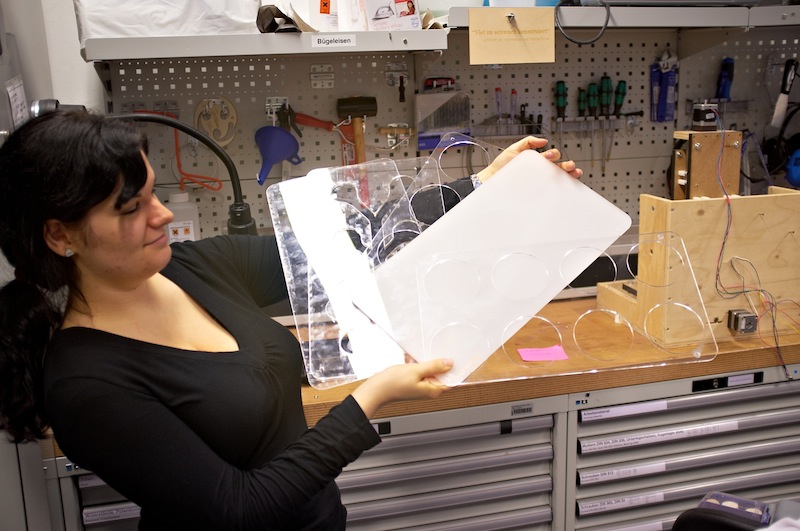 Niklas created the electronics for the sensor board. He measures capacitive fields and uses microcontrollers that communicate on a bus. In the end, the microcontrollers talk to a web server that keeps care of the costs of the drinks and sends messages to an iPad that displays more information on the door of the fridge. 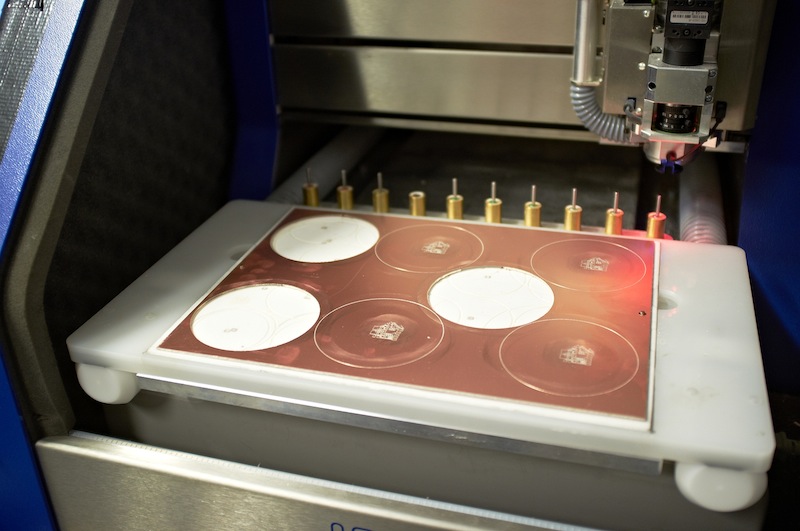 Timo and his microscope: all dorks were using it for high magnifications of their circuits. You can see bad solder points or brocken paths on a PCB with this simple microscope. 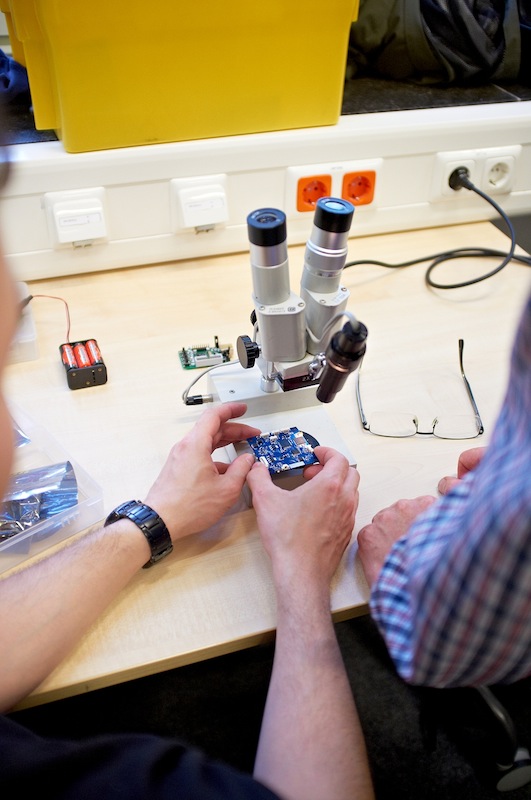 Of course, he also brought his quadcopter to the event and used the cnc milling machine to create some spare parts for the flying device. 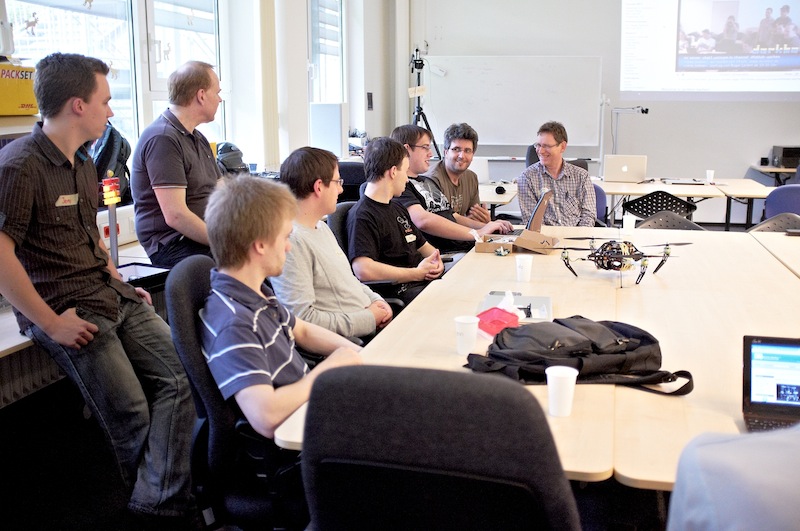 It was a nice meeting with many visitors. We waited longer than usual for our pizza since there was a EM match at the same time. Roksy took care of the pizza orders and checked the EM match score frequently.