Arduino in a Nutshell

Downloaded over 170,000 times!
The Arduino is a family of microcontroller boards to simplify electronic design, prototyping and experimenting for artists, hackers, hobbyists, but also many professionals.

This little booklet, written by Prof. Jan Borchers, introduces you to using an Arduino. It comes with shopping tips and a SparkFun online wish list to get the parts you'll need.

Book size is 8 x 6 inches. Print at original size (100% scale!) onto larger paper and cut to size outside the cropmarks on the cover. The size is also perfect for reading on an iPad. 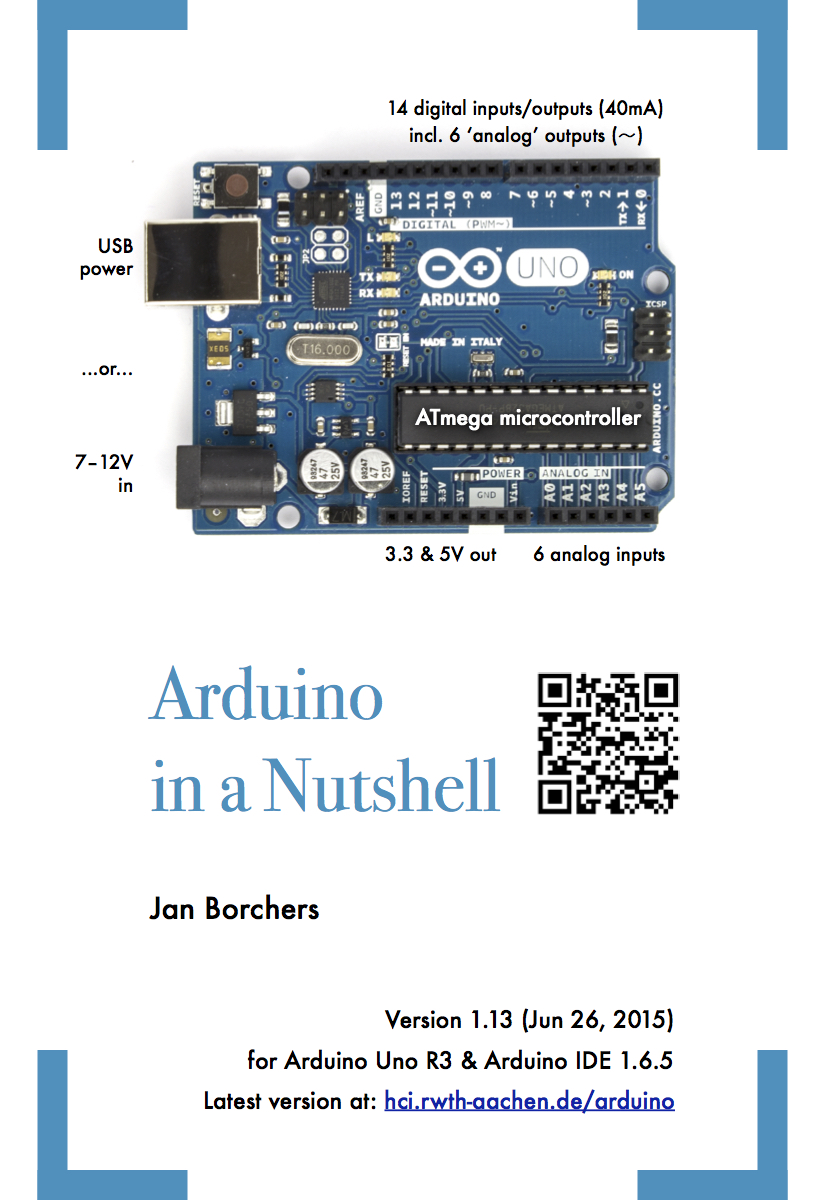 Arduino in a Nutshell by Jan Borchers is licensed under a
Creative Commons Attribution-NonCommercial-NoDerivs 3.0 Unported License.
Permissions beyond the scope of this license may be available by contacting the author at
http://hci.rwth-aachen.de/borchers.

I've been teaching Arduino classes since 2008, mostly to CS students, and in 2012 I spent one evening introducing two friends to it again. Being on sabbatical and all, I couldn't keep myself from just writing through the rest of that night and adding some Fritzing diagrams the next morning, and the result was a short little booklet introducing Arduino basics. Since then, I've kept updating and debugging it, and adding a bit more polish.

Yet another introductory book, you say? Yes - because the Arduino boards and IDE change so frequently that first-step tutorials and books are bound to become outdated after just a few months. I wanted something that got people started with the latest stable "beginner's" board and IDE. I have kept updating it as new versions of the board and IDE have come out, and intend to continue doing so. If the board changes, I'll keep a version for the older board online too in case you start out with one of those.

I'm forcing myself to keep it to one book page per experiment wherever possible - as I add information, I tighten up my writing to stay within that limit. Helps keep me from rambling on.

I also wanted to capture the fun of our hands-on learning session, with very little overhead. It's written for people who've done a bit of programming at some point in their lives, but are new to electronics, and all experiments together can be completed in a long-ish night.

Finally, I wanted something that doesn't take up your laptop screen while you're working in the Arduino IDE, so it's a PDF you can print 2-up on 8.5x11" US Letter paper, fold in half and staple into a booklet. That also happens to be close to the screen size of an iPad. :)

Feel free to use this for yourself, with your friends, or in your classes, and let me know how it goes! See the license for details. A request: instead of hosting a local copy of the PDF on your servers, simply link to http://hci.rwth-aachen.de/arduino. That way we can make sure everybody always gets the latest version, instead of old copies floating around. I'll archive older versions here too. Thanks!

Teaching with this booklet