Jonathan Diehl developed the official UIST 2011 Conference App. After CHI, UIST is the most influential conference in Human-Computer Interaction according to Microsoft Academic Search.

The app lets you


We teach user interface design and mobile app development, and have been going to UIST ourselves many times, and we think it's pretty useful. For example, it doesn't require a working internet connection to run (if you've been at any academic conference, you know what we're talking about). It works on iPhone, iPod touch, and iPad, making use of the larger iPad screen with a separately designed UI.

Jonathan is a senior PhD student at the Media Computing Group, and has taught mobile app development for several years. iPhone Application Programming has been among the top 5 downloads on iTunes U, and recently became Germany's #2 iTunes U download. 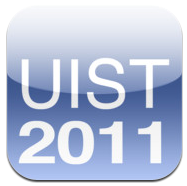