iCatch: a location based tagging game

iCatch is a multi-team tagging game based on players’ location. Players must form small teams and, thereafter, they compete against all the other teams in the game. There are three roles that users can choose from: operator, runner or hunter. The first one is a situated role to be played on a desktop Mac, while the latter two are mobile ones, currently deployed on iPhone devices for testing. Each team must have at least one player of each role in order to be eligible to play. The game employs a client server architecture, where both the desktop and the mobile applications act as clients. The server is responsible for keeping a consistent game state across all connected client devices and also serves as a central point for all the communication.

The people behind iCatch

iCatch initially started out as a student practical lab project that was supervised by Gero Herkenrath and Max Möllers in the fall of 2011.

Standard games have always been an immersive experience that draws the player in an imaginary world. However, very few games have attempted to combine this virtual universe with the world that the player physically occupies. iCatch aims to merge these two worlds, and provide a unique experience to its players, taking into account all the affordances of the mobile context the game is to be played in.
With the advance of mobile devices in recent years, we have come to a point where a large number of games for smartphones exist. In order to stand out, some of them employ non-traditional ways to control the player’s representation e.g. stirring the car you drive by tilting the device. iCatch takes advantage of another type of sensor data, namely the global position of the player and also employs a social aspect. Since people need to form teams and cooperate in order to succeed in the game, iCatch is expected to also have a big social impact on its players. Furthermore we were also largely motivated by the vast recent research in the field of location based mobile guides(2) and new concepts emerging in academia like gamification(3), for example.

iCatch requires teams to be formed before the game can actually be played. Each team must consist of at least one representative for each of the three roles and is also given a base which is a location on the map providing shelter for the team.
There is a single operator for each team and he is the strategist – he sees his own runners and hunters on a map(1) as well as opposite teams’ ones. He is able to assign targets to the players in his own team and upon completion the team earns either points or money. The operator is also able to browse statistics for his team and by concept has access to some special things that are not available to the mobile users.
There can be multiple runners and hunters within a given team. Their role is to capture the targets they were assigned to by their operator. Runners capture checkpoints, earning points this way and hunters try to catch opposite teams’ runners and steal their points, which are transformed into money within the stealing process. The necessity for two different units, points and money, is present since we want to provide an evolving, long-term game. By achieving a certain amount of points a team levels up, while money allows buying special items from the item store. This store is accessible to the operator only and he is the one responsible for the purchasing of items. In order to secure their points runners need to deposit them to their team’s base. The base is only visible to the team that owns it.
A runner is presented a map view(1) on his mobile device with his team’s base and assigned checkpoints marked at the location they are situated. On the other hand, a hunter is shown an arrow that points him to the direction of the runner he is assigned to and additionally the distance to him. 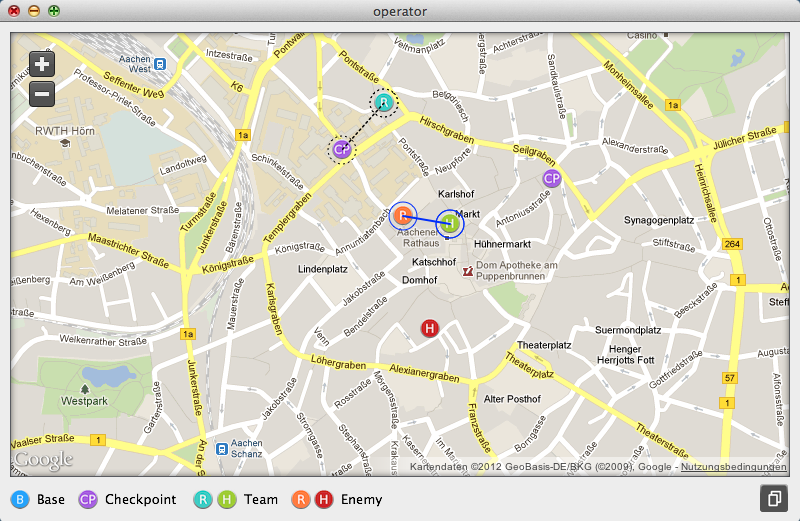 An operator has assigned targets to his teammates

A runner captures a checkpoint 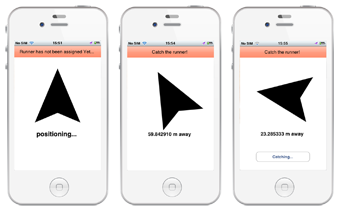 A hunter catches a runner

"hunter" and "runner" encounter each other 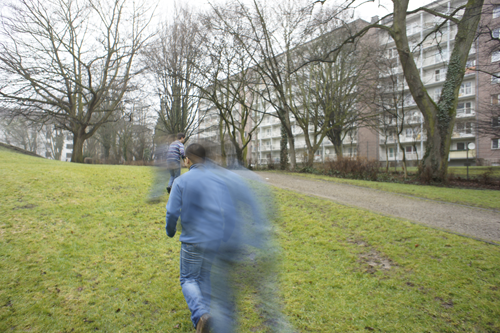 "runner" runs into a "hunter"

For the moment the game is still under development with other features to be added thus aiming to enrich the user experience. No user tests of the game have been performed so far, therefore we still lack user feedback on the game itself.


(1) All maps that are part of the user interface of the game are actual map data from Google maps.
(2) Example for location based mobile guide is the Aixplorer project, also being developed by Media Computing Group at RWTH-Aachen.
(3) Gamification involves employing everyday tasks in a virtual world, where they are represented as quests that the player needs to complete thus aiming to make repetitive and boring things more interesting.