I bought an eBike in June 2013, and have been using it on a daily basis nonstop since then. I use it for commuting to work, for business meetings in the city, and trips around Aachen. I wanted to share some basics so you can get up to speed quickly if you're looking for one yourself.

Motor: eBikes still require pedaling, but the motor supports you based on how hard you pedal yourself. So you still get a light workout, but riding uphill is almost as easy as an even road. I like to think of it as "redefining hills to be flat instead". Great for biking in Aachen city. :) Motors can be mounted in the front wheel, rear wheel or in the middle. Middle gives you the best weight distribution (low and center), the motor can make use of the gear shifting system, and it can kick in right when you start pedaling. The Bosch system (motor, battery, display, and handlebar controller) has been the market leader since 2012 and continues to get good reviews (powerful and kicks in without delays). It also includes support when pushing your bike uphill or out of an underground garage. I'll focus on the Bosch system below where applicable.

Speed: Motor support will turn off at 25 km/h, because otherwise your eBike (also called "Pedelec") would not legally be a "bike" anymore. You can buy faster eBikes ("S-Pedelecs") that support you up to 45 km/h but they require an insurance (like a small motorcycle/"Mofa"), wearing a helmet is legally required, and you cannot use bike lanes anymore unless they're marked as "free for Mofas". In cities, that means you are stuck in traffic with the cars, and you can't use one-way streets that are marked free for bikes in the opposite direction, so in cities using a normal eBike/Pedelec is faster. If you have a long (10+ km) overland commute, an S-Pedelec starts to make sense.

Distance & Battery: Typical eBikes batteries like the Bosch one will last for around 50 km when you choose maximum motor support. This varies a lot based on your weight, how hilly your ride is, how fast you want to go and what support level you choose on the handlebar controller while riding. The Bosch battery is comparably light (2.5 kg). It detaches from the bike and charges in 2-3 hours on a standard wall outlet, using a special charger that comes with the bike. Newer models can also be charged without removing them from the bike. These batteries are expensive: 600–700 Euros, so don't leave them on your bike overnight. Batteries mounted above the rear wheel can make the bike unstable at fast speeds, especially with lady or low-entry frames. Test-drive them, and slightly let go of the handlebar while riding to see if the front wheel starts fluttering.

Weight: At 20–30 kgs, eBikes are heavy because of motor, battery, and stronger frames for the higher motor-induced forces. If you have to carry your bike upstairs every day, try to lift and carry one in a store before buying.

Gear shifting systems: There are traditional chain systems and systems with gears inside the rear wheel hub, but I like the NuVinci Harmony system best. The NuVinci hub is continuous, so you don't run into trouble if you have to switch down from a high to a low gear because of a sudden stop (typical at traffic lights or intersections in city biking). You can adjust the transmission ratio continuously using a handlebar controller. If you get the NuVinci Harmony option, you also get an automatic mode: You select how fast you want to pedal, and the system changes "gears" continuously and automatically---if you want to go faster, just pedal a little harder, the bike will get faster, and the system switches to a higher gear so that your pedaling frequency stays the same. Excellent for quick starts from a traffic light, or for starting uphill! You can basically forget about switching gears ever again. Enviolo is the bike technology division of Fallbrook, the manufacturer of the Nuvinci system. They have a nice video explaining the Nuvinci system.

Model cycles: Manufactures present their new models at the Eurobike convention in late August. These become available at dealers around Septemer/October. By end of January you can find reviews of most new models online. By May it becomes more difficult to find the exact model you want because production is ramping down in preparation for the new model year. I had to get mine in Leverkusen when I bought it in June.

Reviews: ExtraEnergy e.V. is a nonprofit organization that tests lots of eBikes. See their March 2013 report. ElektroRad, eBike Magazin and ElektroBike are magazines with test reports. Stiftung Warentest and ADAC also recently tested eBikes, although the problems they report don't seem to match the experience dealers and owners have.

So what did I get? After some reading and test-driving, I got a Stevens Caprile Gent 52 cm. It was the only bike I could find that combined the latest Bosch engine and its low-mounted battery with the NuVinci Harmony gear system in a tour bike frame. It also features disc brakes, an air suspension fork, was a winner in the ElektroRad 1/2013 review of some sixty eBikes, and it looks nice. :) 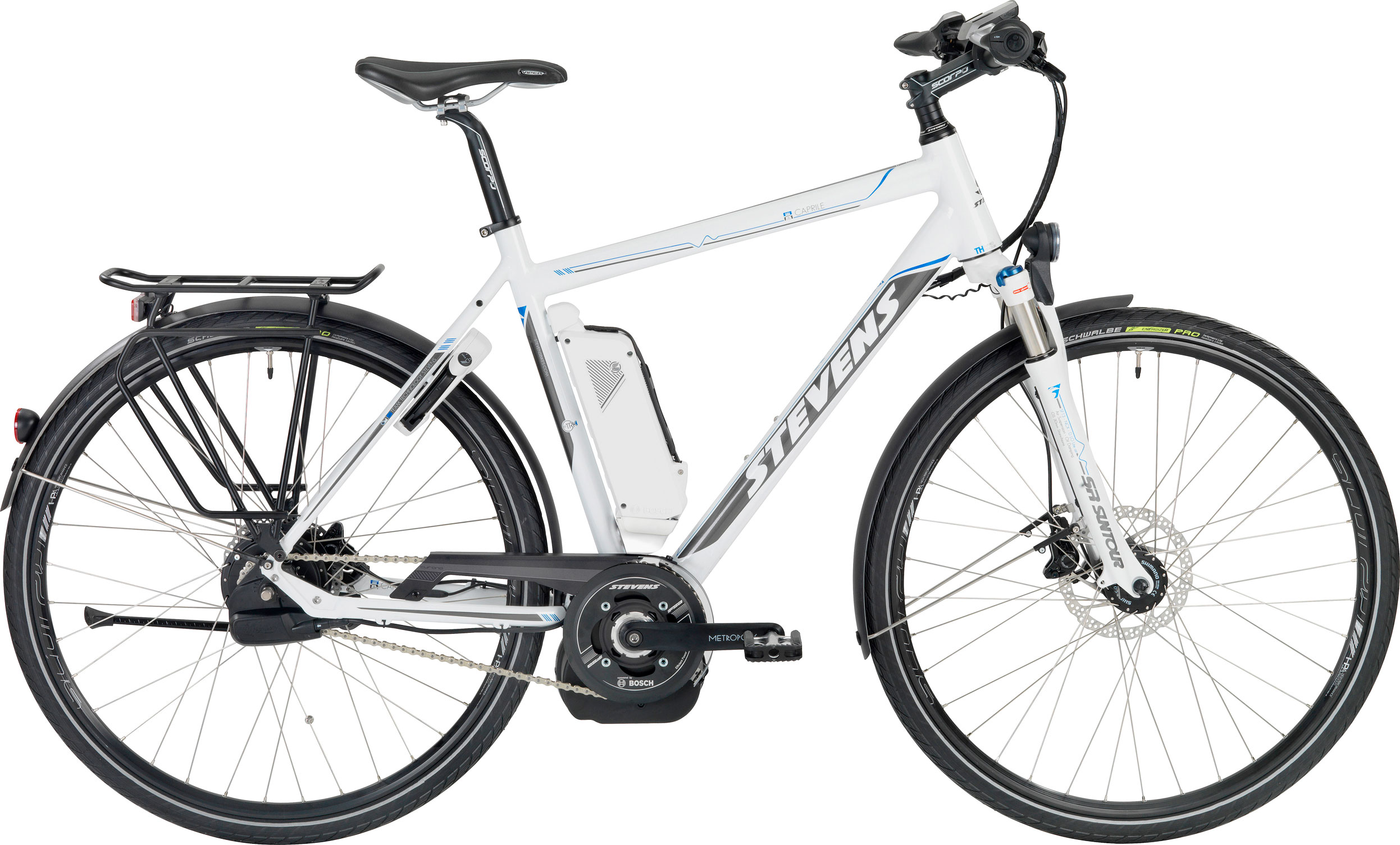