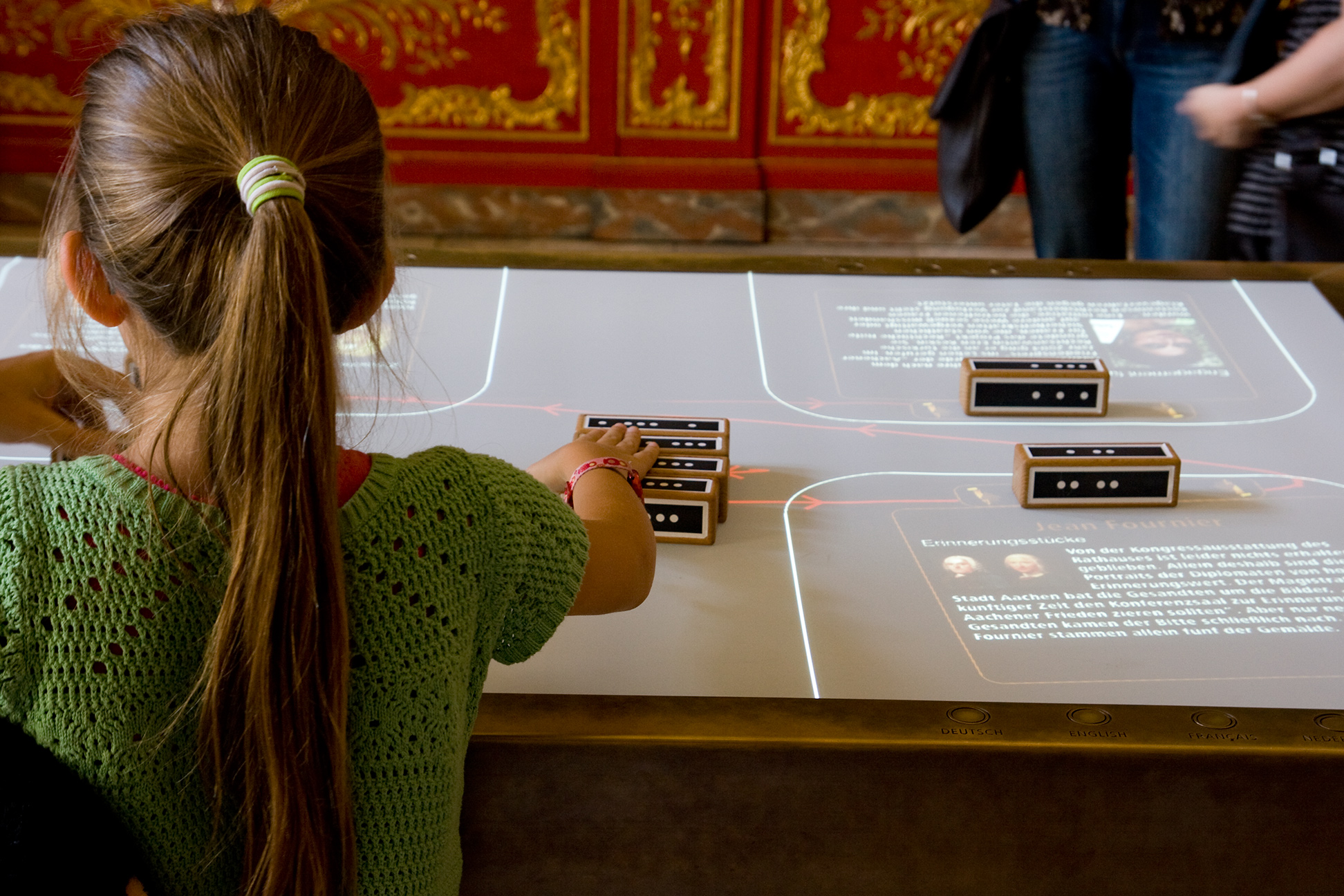 The Aachener Frieden is an interactive table in the Friedenssaal, located in the city hall. It features eight wooden blocks that let the table display information about the historical persons involved in the Peace of Aachen. The blocks are connected by a red line which gives the user a path he should follow when choosing the next block.

After having informed yourself comprehensively about the influence World War II had on Aachen's history in the Master Craftsmen's Kitchen, you are now entering the Friedenssaal with its gorgeous architecture. As you look around, you discover a table in the middle of the room with a surface glowing like a screen. You are curiously approaching the exhibit.

On the table's surface you discover four semi circles arranged around the table. Furthermore, several about 10 cm long wood blocks spread over the table. At the opposing side of the table you see a visitor standing at one of those semi circles reading through the information displayed in it. You go over to one of those semi circles as well. At the table's edge you discover the language selection buttons common for the Route Charlemagne. After pressing the button for your language, a sentence appears asking you to put a block into your area.

You look around the table to gain a closer look at the wooden blocks lying on the surface. You grab one of them and place it into your semi circle.

All of a sudden the picture of an 18th century Person appears along with a text. The heading reads "Earl of Sandwich". To the same degree amused and intrigued by the name you start reading. While reading the text you figure out that the pictured person really is an Earl named Sandwich. Apart from that the text bares his most important personal dates. The last line reads "Browse to the next page to learn how the Earl of Sandwich has influenced the Peace of Aachen." After tilting the block you see how the text disappears and a new page appears. Fascinated by the interaction you try out the tilting several times. By tilting the block you can apparently skim trough the information about the Earl of Sandwich. You browse back to the page describing Sandwich's influence on the Peace of Aachen. Apart from other things you learn that he attended the peace negotiations for the Peace of Aachen until 1748.

The visitor, a high school teacher from Belgium, is saying something in French that you do not understand while handing over her block to you. You nod your head in gratefulness. Now you place the handed over wood-block into your semi-circle and information becomes visible as with Earl of Sandwich before.

All of the blocks seem to be connected trough some kind of "thread" by red lines, jumping from block to block. After following this connection and reading several contents it becomes apparent to you that this is a chronological guide to the history of the Peace of Aachen – completely in terms of the writing you read on the table.

While you were exploring the Peace of Aachen you barely recognized that a group of visitors formed around the table that is curiously watching you. You take a block and hand it over to a visitor, a twenty years old art-historic student in the second semester at the RWTH. Then you leave the exhibit. While leaving the room you glance back over your shoulder and see how the student is playing enthusiastic with the exhibit, getting to know the Aachener Frieden.

The blocks are equipped with small infrared LEDs arranged in a straight line. Each side of each block exposes a different pattern of IR LEDs which can be interpreted as a binary number. Those numbers are recognized by cameras inside the table so that a unique id, position, and orientation can be computed for each block. The visual information is than forwarded to two short throw projectors in the table which display the user interface on the table's surface.