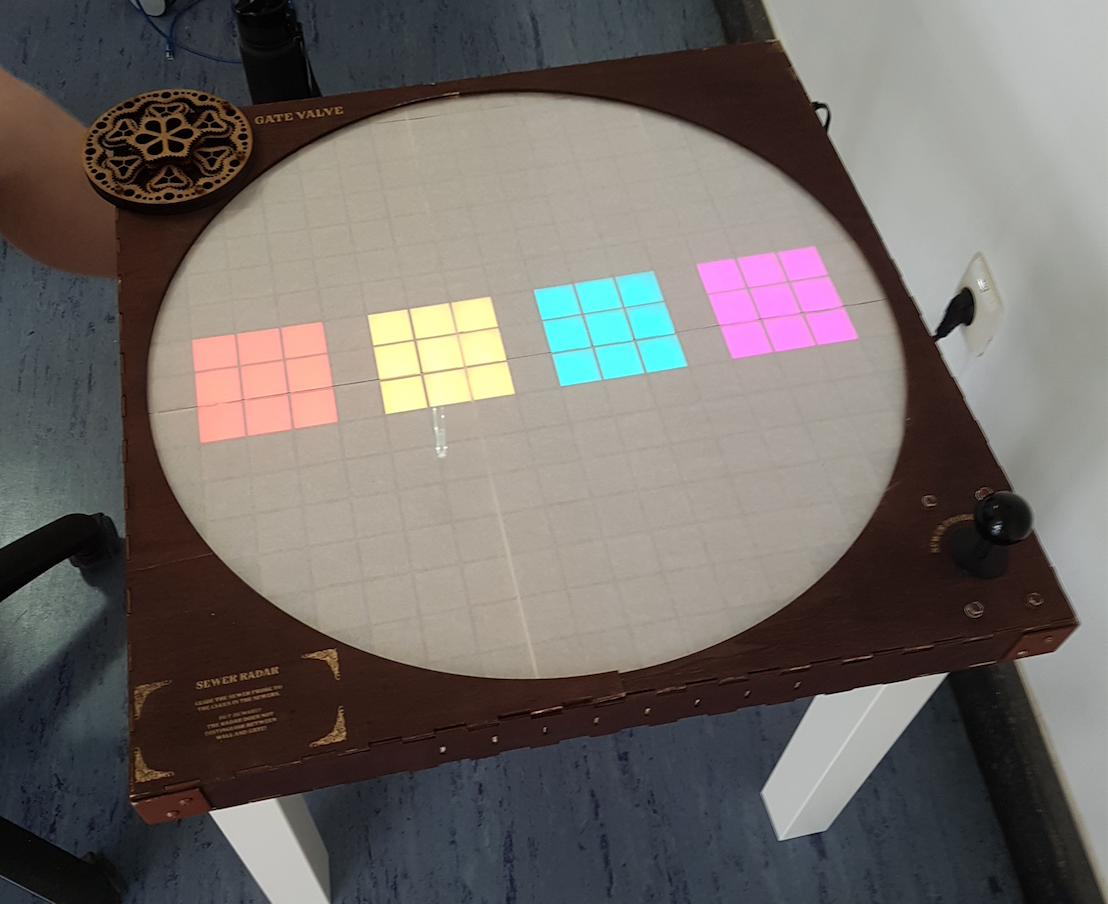 The idea of our project was to have an experience that could actually happen in a ‘steampunk world’, so we tried to shy away from things like displays or games. We ended up going with the idea of a radar that shows us some underground sewers. We control a probe that has to find clues within these sewers. This allows us to tell a story that goes beyond just one room without having to resort to a game with a player avatar. Now we can have an experience that should be quite similar to what steering the probe would actually feel like. Obviously we had to make some compromises – one could imagine that a steampunk radar would use a CRT or more antique looking screen – but the general appearance is still satisfactory to us.

The usage of the project is fairly simple: First we require the input of a code, in our case a colour sequence. Then the ‘players are presented with a labyrinth with a blinking player pixel and four other pixels. The first intuition should be to use the joystick and look for a moving entity – and it is rewarded: the ‘probe’ moves. But soon after another challenge presents itself: The way is blocked, there’s only little room for movement. This is the most challenging part of the riddle. After a while one should think that there might be some other way to manipulate the happenings on the radar. This should lead to the search of another input method. The players should notice an intricate contraption made of cogs in one corner of the device. Playing around with it after a while leads to the device reacting: a sound will be played. After checking the labyrinth the players quickly notice that it has changed: the path is now cleared. The hints in the corner explain what happened (or help with the discovery in the first place): The radar cannot distinguish between walls and gates. That means there must be gates and walls in this labyrinth, and the rotating contraption labelled ‘gate valve’ must open and close the gates. With this knowledge the players quickly manage to pass the labyrinth using teamwork. One person should steer the probe while the other clears the way of any closed gates in the way. After collecting all four of the clues in the labyrinth, the probe sends us the code, again as 4 colours.

For convivence’s sake the cogs can be pressed after solving to reset the whole device.